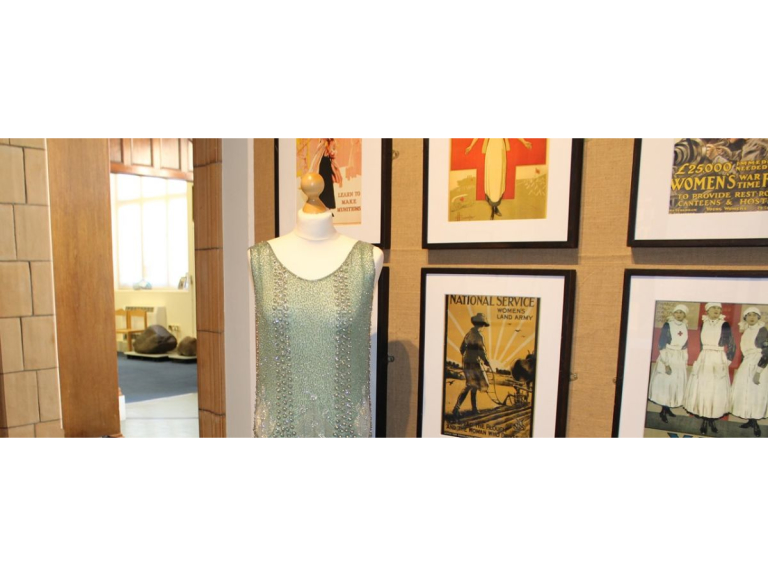 Part of the Worcestershire World War One Hundred programme, Fashioning Peace is a temporary exhibition at Worcestershire County Museum exploring how the changes brought about through the Great War 1914-18 were reflected in clothing and fashion from 1918 through to the roaring twenties.

The Great War changed everything. From science and medicine to art and culture to the very core of society and its values, its effects were far-reaching and dramatic. Featuring the County Museum’s outstanding costume collection, the exhibition begins with stories of scientific, medical, and cultural changes brought about by the war – including a wonderful model of an aeroplane and an unsettling gas mask – before moving on to costumes which demonstrate social, economic and technological advances in a beautifully visual way.

The struggle for women’s suffrage began long before the Great War, but it was the valiant efforts of the women and girls during the conflict that is widely regarded as being the catalyst for women gaining the right to vote in 1918. Echoing these developments, the restrictive crinoline and bustle, tailored seams and intricate boning of female costume pre-war period disappeared forever. A typical 1920s dress had minimal shaping, no tailoring and hems at knee level: fashions for women were unlike anything that had gone before. It was a revolution in dress and paved the way for the modern age.

The costumes on show are taken from the County Museum’s Tickenhill collection which contains over 2000 items all reflecting the changing fashions and values of the last three centuries.