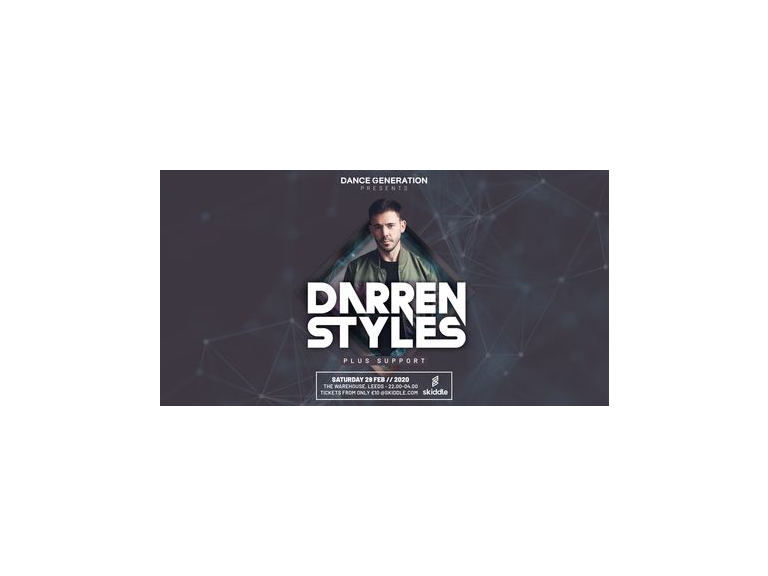 Dance Generation is proud to present one of the hottest acts in the world of harder electronic music. For one night only' Darren Styles will command the dance floor at the mighty Warehouse in Leeds.

Darren Styles, a man that needs no introduction after reigning at the top of his game for over 20 years. He has headlined the biggest stages around the globe including Creamfields, Tomorowland, EDC Vegas and Defqon Holland (to name a few).

Mr Styles by name and also by nature; as a master of multiple genres, from Hardcore to Hardstyle, he frequently graces the lineups of many of the hard EDM festivals/charts.

Best known for his chart topping hits "Save Me" and "Your My Angel", he has more recently become one of the best selling artists on the highly respected MonsterCat imprint releasing anthems such as "Us Against the World" and his three-way collaboration with fellow hardcore heads Gammer and Dougal - "Party Don't Stop".

Since setting up his own Electric Fox label with Da Tweekaz, his stock has risen into the stratosphere and has blown away the scene with the seminal release of "Switch", a track played by every DJ across a multitude of genres and dance scenes.

His B2B sets with Ben Nicky have witnessed an artist pushing himself to the very limits of his creativity.

Tickets are on sale via Skiddle. Get yours now and keep your eyes out for some tasty competitions and prizes including a meet and greet with the artists.