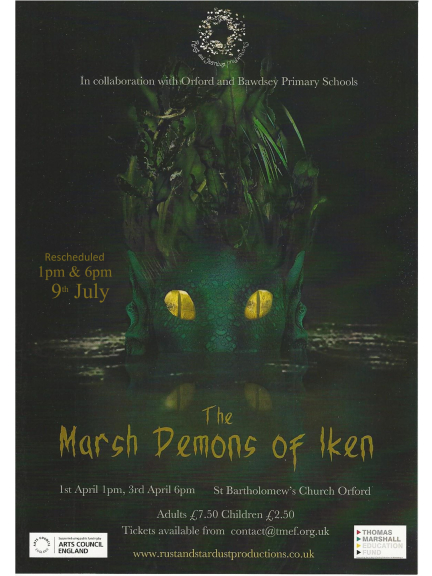 The minster was eventually completed on the site of the historic church at Iken which still bears his name and you can see St Botolph's stone cross which is on display within the church.

Many people will remember the performances of Rust and Stardust in Orford Church over the past few years. The members of this talented young puppet company have presented their interpretation of many local Suffolk folk tales including The Wild Man of Orford, The Green Children of Woolpit and Black Shuck. This last one was a collaboration with the children of Orford school producing their own puppets as part of the national Arts Award Scheme and running wild as Shuck’s pack through Orford Church to the delight of the audience in 2018.

Rust and Stardust have been successful in securing an Arts Council grant to fund another collaboration with Orford School and Bawdsey School this year.

The theme of this year’s project will be The Marsh Demons of Iken covering the curious goings on with St Botolph and Iken Church. Anyone who witnessed the enthusiastic children performing Black Shuck won’t want to miss this event. Anyone who missed Black Shuck doesn’t know what they missed and should make sure they don’t miss The Marsh Demons of Iken.