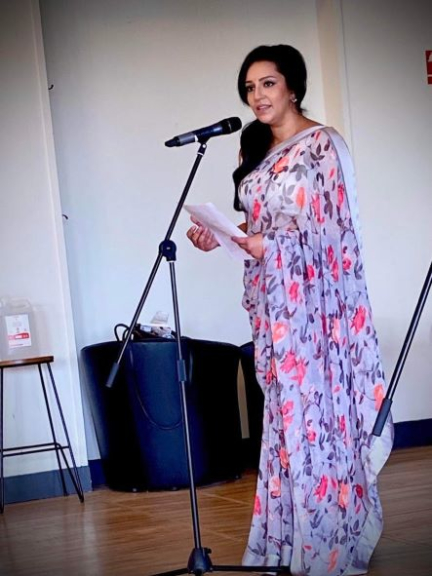 Post-Lockdown life has brought back many much missed pastimes – embracing family and friends, queue-less supermarket shopping and for those in the poetry community, real life, in-the-flesh-and-not-on-zoom poetry slams!

Her love affair with spoken word began one rainy Tuesday evening at PASTA, hosted at the Wolverhampton Arena theatre by Poets, Prattlers and Pandemonialists; ‘I used writing as a tool to help cope with being a new mother – but sharing my writing on stage that night gave me such an incredible buzz, such a sense of power, I haven’t looked back since!’

Priyanka’s work explores themes of love, identity, mental health and motherhood. Being a 3rd generation British Asian female tightrope walking between two cultures, whilst suffering from post-natal depression and a new-mother identity crisis – her work is both emotive and thought provoking. She is now a two time slam champion, open mic regular and member of the Wolverhampton Punjabi Women’s writing group. Her work has been published in various publications such as Geetanjali and Beyond, as well as in the House of Bread Anthology. She has been featured on Big City Radio and the Brum Radio poets show, and has had poems commissioned by the Boundary Way Project.

The future holds many more exciting projects and performances, including the Offsite9 British Art Show in conjunction with Creative Black Country – performed with the Wolverhampton Punjabi Women’s Writing Group at Wolverhampton Literature Festival (Saturday 29th January 2022 @ Central Library Wolverhampton). This side of Christmas, she will be performing at set at December’s Country Voices at the Water Rat in Ironbridge  hosted by Offa’s press (Saturday 18th December, 2:30-4pm). You can get to know her better on Facebook / Instagram (@priyankas_writings). This creative’s space is definitely one to watch!

West Midlands businesses offered support to mark 2022 with a move towards net zero
Sign up for offers
Sign up for what's on guide
Popular Categories
By clicking 'ACCEPT', you agree to the storing of cookies on your device to enhance site navigation, analyse site usage, and assist in our marketing efforts.
For more information on how we use cookies, please see our Cookie Policy.