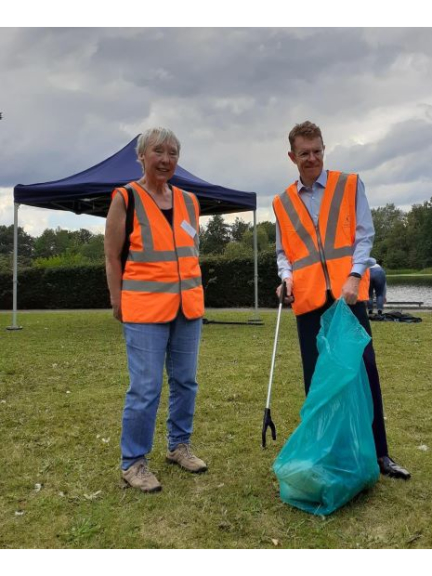 Working alongside Birmingham, Coventry, Dudley, Sandwell, Solihull, Wolverhampton and Walsall councils, they will be mobilising an army of volunteer #LitterHeroes to clean up the region’s parks, streets and waterways on 24th and 25th June and beyond.

As well as polluting our streets, parks and countryside, litter harms wildlife, domestic pets and cattle, and costs us, as a nation, nearly £1 billion a year to clean up.  As the eyes of the world turn to the region for the upcoming Commonwealth Games, we want to make sure it is looking its best.

The weekend of action will launch with a clean-up involving Lanesfield Primary School’s Eco-Club and the Mayor of the West Midlands, Andy Street, on Friday 24th June in Wolverhampton’s Hilton Park.

On the same day, staff from 21 McDonald’s stores around the region will take part in a series of litter-picks and We Clean Ltd are donating the time of 15 staff to the campaign to tidy up Paradise in Birmingham.

This will be followed by a series of family-friendly community litter-picks on Saturday 25th June, delivered by each local authority and Keep Britain Tidy.

Together, we will be removing litter from local parks, streets and waterways. All equipment will be provided and anyone is welcome to these events, whether they are a first-time litter-picker or an experienced #LitterHero.

We are calling on local residents, businesses and community groups to sign up to the campaign and either take part in their own litter-pick or join an organised event.

To find out more and to book a place at a community litter-picking event, or if you are a member of an existing litter-picking group in the region and would like to host your own event on Saturday 25th June, please visit www.wmca.org.uk/wmclean

Keep Britain Tidy’s Chief Executive, Allison Ogden-Newton OBE said: “The eyes of the world will fall on the Midlands as the much-anticipated Commonwealth Games takes place, and we want to make sure the region is looking its best for competitors, residents and visitors.

“We need the public’s help ahead of this important occasion. We want to encourage everybody to take pride in the region by helping to make a difference in neighbourhoods, parks and open spaces.”

Andy Street, Mayor of the West Midlands, said: "It is great news that local heroes from across our region are stepping up to take part in The West Midlands Great Clean Up - a wonderful grassroots effort to galvanise action to instil community pride in the place we all call home and get the West Midlands looking its best ahead of the Commonwealth Games this summer.

"I made an election commitment to utilise my convening power as Mayor to help clean up our region and I'm so pleased that - in conjunction with Keep Britain Tidy - we are staying true to that promise. With litter picks all across the region taking place this Saturday, I would encourage residents to get involved and sign up to be a part of the West Midlands Great Clean Up.”

Doug Wright, local McDonald’s franchise owner, said: “I’m pleased to be able to support The West Midlands Great Clean Up with staff at our McDonald’s restaurants across the region stepping up to contribute to this grassroots effort to help the West Midlands look its very best ahead of this summer’s Commonwealth Games.

“This region has been very kind to me over the years and its wonderful local residents have been loyal customers at our various McDonald’s outlets here in the West Midlands.

“I consider it a privilege as well as a duty to involve my business in such an important cause. I look forward to an action packed few days.”

Fallen Second World War airmen remembered at new city housing development
Sign up for offers
Sign up for what's on guide
Popular Categories
By clicking 'ACCEPT', you agree to the storing of cookies on your device to enhance site navigation, analyse site usage, and assist in our marketing efforts.
For more information on how we use cookies, please see our Cookie Policy.