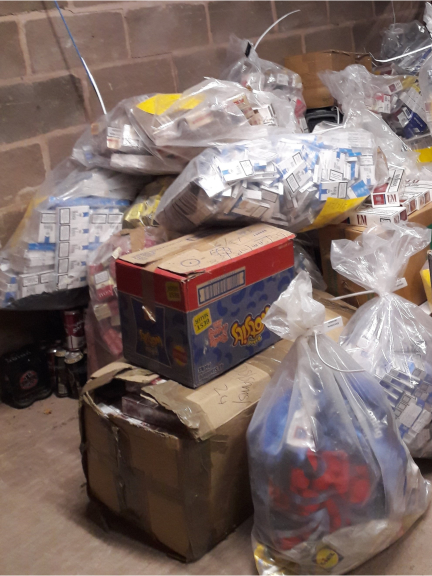 Illegal cigarettes and tobacco seized during raids in Wolverhampton will be recycled into compost and dampproof courses under an environmentally friendly way to deal with the goods.

Trading Standards officers have given hundreds of thousands of cigarettes and more than 60kg of tobacco to the No Ifs & Butts recycling scheme, which works with Trading Standards teams across the country.

The illegal haul, made up of 372,000 cigarettes, 50kg of rolling tobacco and 12kg of chewing tobacco, has been removed at no cost to the council and will now be recycled.

Specialist machines separate the tobacco leaves and paper wrappers from the cigarette butts and then mix them with mulch. Cigarette butts, which contain plastic, can be used in dampproof courses.

Trading Standards officers seized the illegal cigarettes and tobacco during a series of raids at locations across the city.

The large haul would previously have been burned, but officers are keen to look for more environmentally friendly options that help support our commitment to make City of Wolverhampton Council carbon-neutral by 2028.

Councillor Steve Evans, Cabinet Member for City Environment, said: “We will not tolerate the sale of illegal goods in the city and our Trading Standards team works very hard to identify and clamp down on offenders and remove any stock.

“Thanks to the No Ifs & Butts recycling programme, we have an opportunity to make sure the items we have seized are transformed into something beneficial.

“It’s great to see such an innovative approach to dealing with the illegal goods which supports our environmental commitments.”

Officers from the council’s Trading Standards team have issued some warning signs to look out for when buying cigarettes or tobacco.

The tell-tale signs of illegal tobacco include unusual taste, cheap price, unusual packaging, spelling mistakes or incorrect logos. They may also have health warnings that may not be printed in English, might not display a picture, might not be printed on a white background and may have different sized lettering to usual.

Anyone who thinks they may have been sold illegal goods or suspect someone is selling them, email trading.standards@wolverhampton.gov.uk or visit www.citizensadvice.org.uk