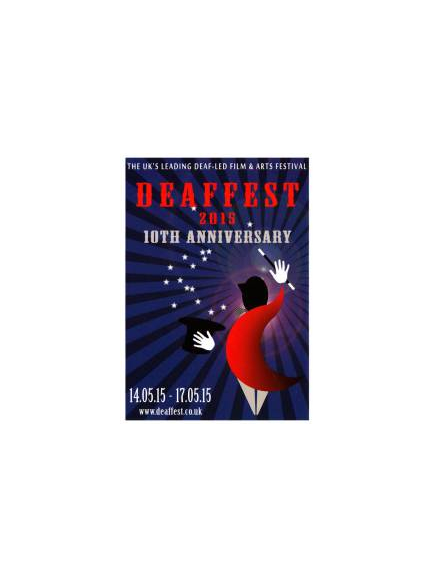 Deaffest has been going for 9 years (with 2 festivals taking place in the same year), hanging in there through good times and bad and when funding was few and far between. This year’s festival was funded by Arts Council England and the BFI (British Film Institute). The attendance figures where on a scale never before witnessed, 2015 proved without a doubt how well deserved that funding was. Deaffest would like to give a big thanks to our sponsors who have contributed to making the festival as successful as it was.

To mark Deaffest’s steady rise in popularity over the years both nationally and internationally, continued this year with even more global involvement than ever before. With an extra day added to fit it all in, 30 students from all over the UK attending various performances and workshops held on Thursday 14th May at theLight House. 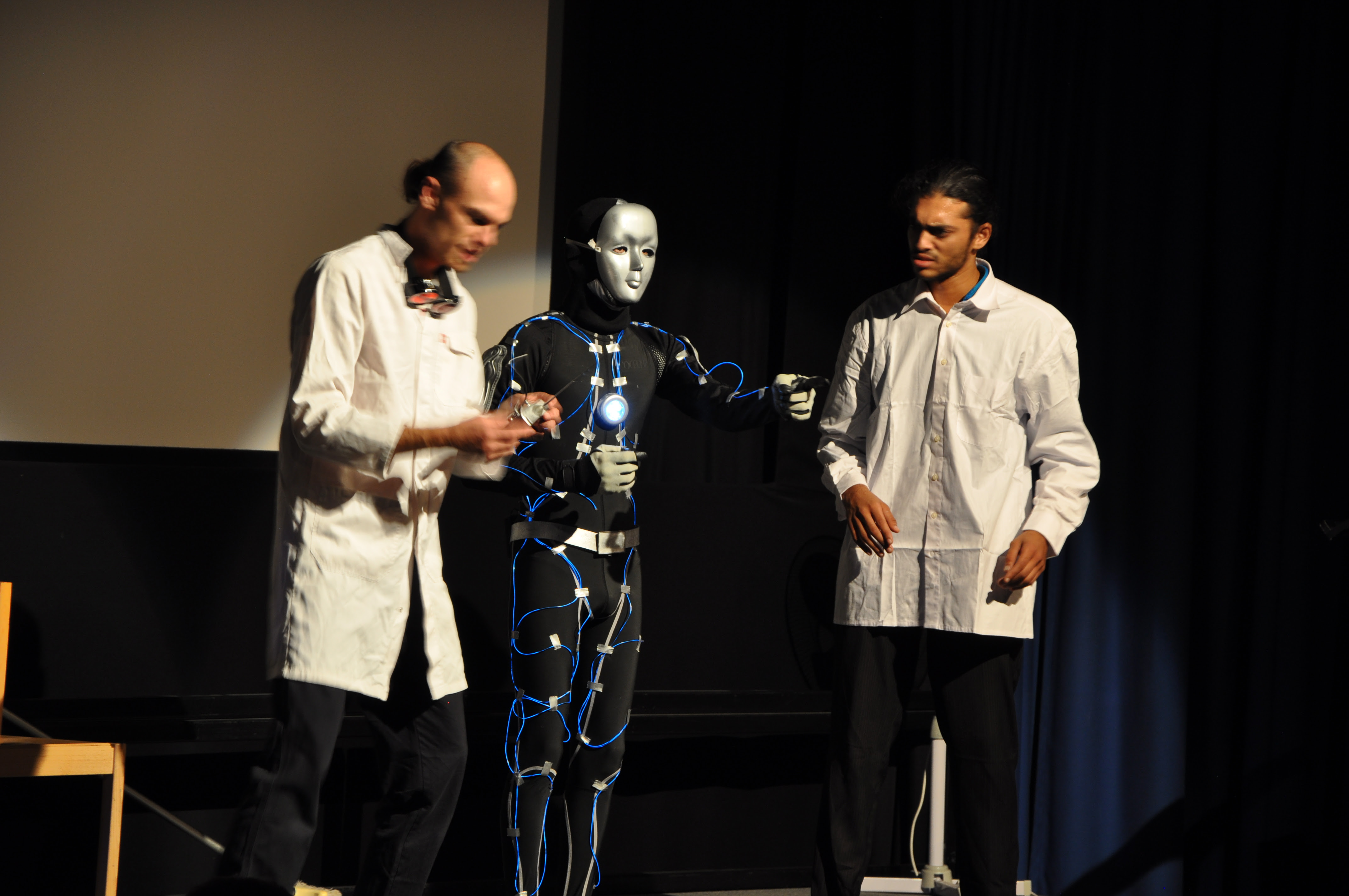 The morning saw the arrival of a theatre group all the way from South Africa. The group Listen With Your Eyes, consisting of deaf actors Bo Tasker, Darren Rajbal and Ismael Mansoor created and performed their comedy for the first time ever in the UK. Central to the plot was an out of control robot whose outrageous antics had school pupils in hysterics. The day was completed with a drama workshop for the children in the afternoon led by the inventive Deafinitely Theatre. Pupils also had the opportunity to check out the deaf art and photography exhibition in the main gallery. This exhibition can be viewed throughout the whole of May 2015.

Internationally acclaimed Italian born VV (Visual Vernacular) expert, Giuseppe Giuranna travelled all the way from Europe to appear at Deaffest to provide a unique opportunity for UK students to learn this fascinating art form from a world expert.  And Friday was the day for students to do just that where an all day workshop for 11–18 year olds was held at the Arena Theatre. Students were put at ease by the charismatic Giuseppe, who ensured that by the end of the day their talents (and the confidence to use them) had reached new heights. 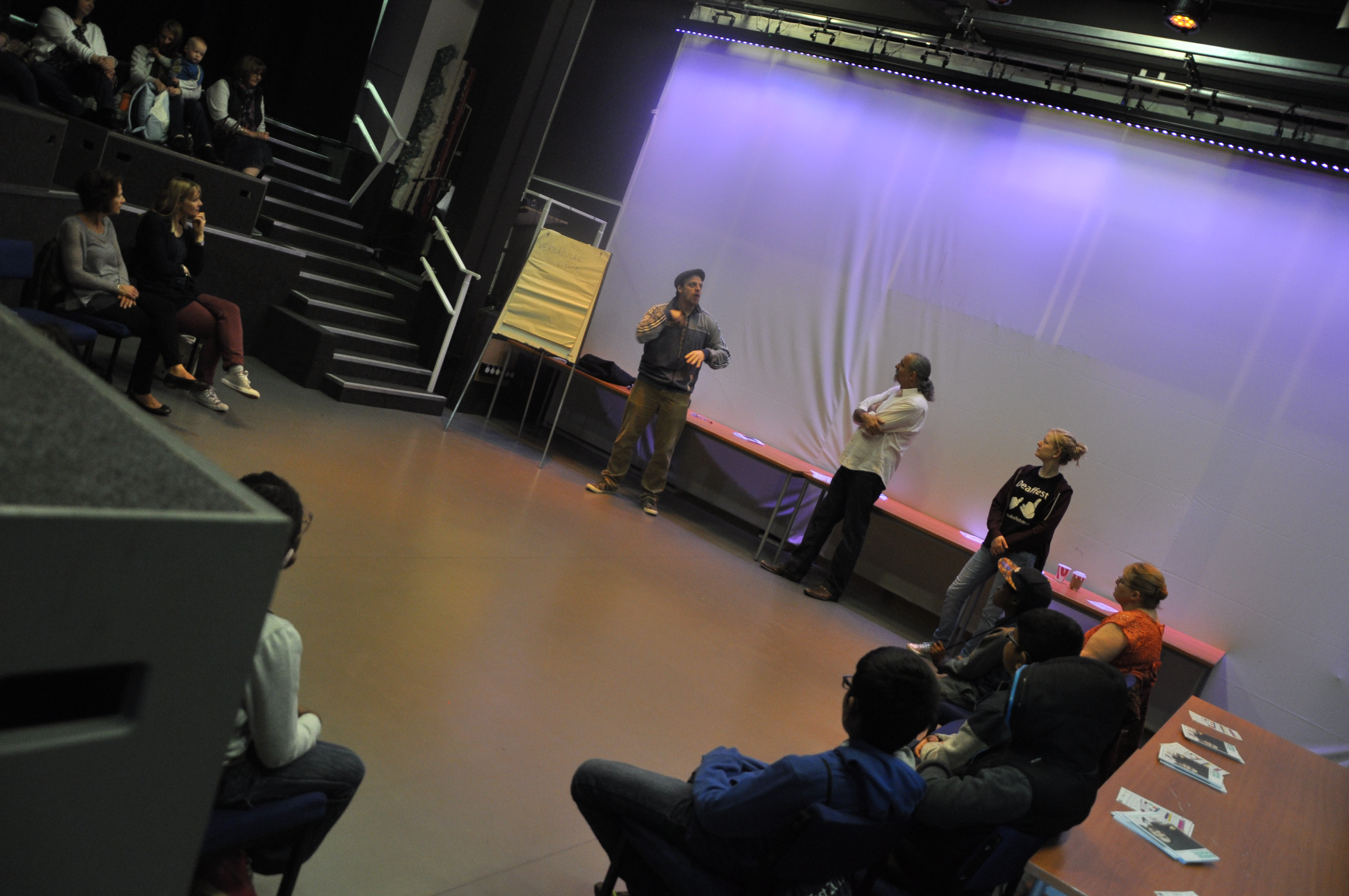 Running concurrently with Giuseppe’s workshop at the Arena Theatre, Deafinitely Theatre’s new production Something Else was taking place. Written by Kathryn Cave, illustrated by Chris Riddell and directed by Paula Garfield, this play was just perfect for 3-6 years old.

On Friday evening the Zebra staff celebrated Deaffest’s 10th anniversary and the launch of the weekend. Many visitors came along including Rob Marris, MP for Wolverhampton South West. Long serving and much loved TV presenter Clive Mason welcomed the audience as the evening got underway. An inspiring speech was delivered by Nikki Stratton and Marilyn Willrich, Co-Founders of Deaffest and Directors of Zebra Access. The ladies then handed over to the Chair of the University of Wolverhampton’s Board of Governors, Dr Simon Walford, who represented the University as Deaffest’s main sponsor this year. The history of theBen Steiner Film Bursary was then shared by Clive, which then led to the premiere screening of the Bursary winner, Teresa Garratty’s film The Quiet Ones. Strong applause greeted Teresa as she took to the stage to make herself available for a Q&A session with the audience. Next, Deaffest welcomed again special guests Listen With Your Eyes who delighted the whole audience with their irreverent humour.

As guests gathered out on the courtyard for the Deaffest Launch Networking Party, one more surprise was in store for them. The air erupted with live rock music as the amazing Beethoven’s Nightmare deaf rock band from the USA gave a two song taster of what to expect at Saturday’s Late Night Deaf Party celebrations.

The Deaffest fair commenced on Saturday morning and people were soon milling around the courtyard chatting and buying from a colourful spectrum of stalls including handmade jewellery and crafts, cakes and savouries, books and goods sold by independent deaf artists and makers from across the UK, Europe and even as far afield as South Africa. In addition to this the wide range of professional ‘Deaf focused’ organisations offered invaluable information and networking opportunities. It was soon apparent that 2015 was by far the most well attended festival yet.

Screenings of films from all the award categories took place throughout the day, giving audiences the opportunity to get up to date with the nominated films ready for the Film Awards Gala that evening.

Another main focus for many visitors to Deaffest was the opportunity to acquire training and expertise in the range of workshops and seminars available at the festival, all easily accessible for deaf participants and led by deaf professionals. These included an hour long BDAYouth workshop teaching International Sign, a Sign Song workshop led by prominent performerJayne Fletcher, further VV workshops led by Giuseppe Giuranna, a seminar on Deafhood by scholar Dr Paddy Ladd, a Sign Poetry workshop led by Richard Carter, and an editing workshop led by media expert Bim Ajadi.

"Amazing and was blown away, always getting better year by year" - Visitor 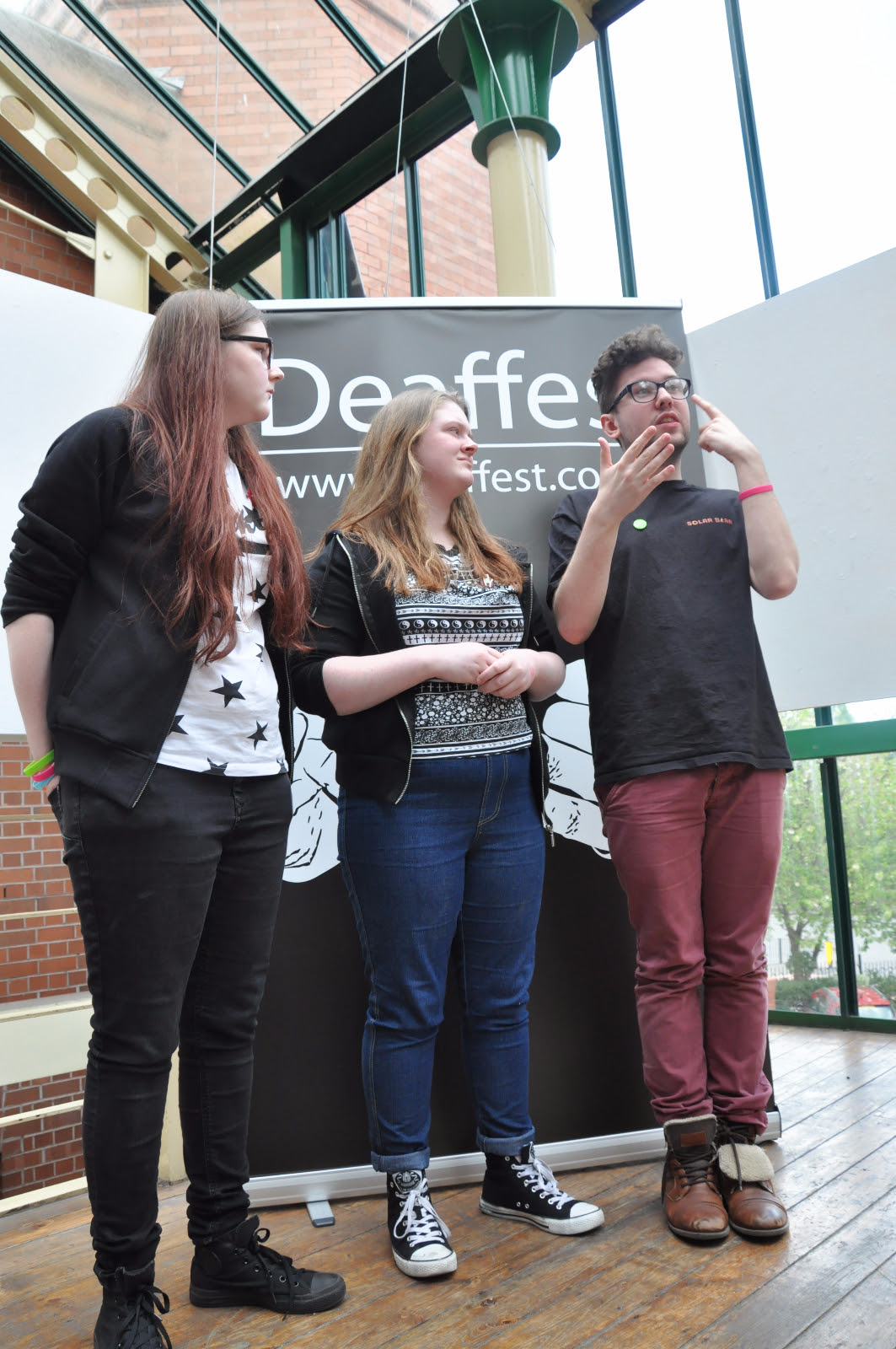 For younger Deaffest fans, an all day workshop for 5–11 year olds took place including sessions by HandprintTheatre and Deafinitely Theatre, followed by the Young Deaffest Award event which packed out cinema seats. Introduced by MC of Young Deaffest Ashley Kendall, assistant producer of Flashing Light Productions, with the award presented by TV presenter and actress Donna Mullings, the event was an exciting one with the winning film A Love Divided by Solar Bear Deaf Youth Theatre, coming a well deserved first. Runners up were the NDCSwith Legend of Ghost Wolf and the NDCS Get Creative Deaffest News Reports.  The films for this award were judged by film director William Mager.

In order to fit in all these events and screenings, Deaffest was deeply grateful for the support from two other Wolverhampton venues; the Arena Theatre and theUniversity of Wolverhampton, both provided space for many of the festival's activities to take place. 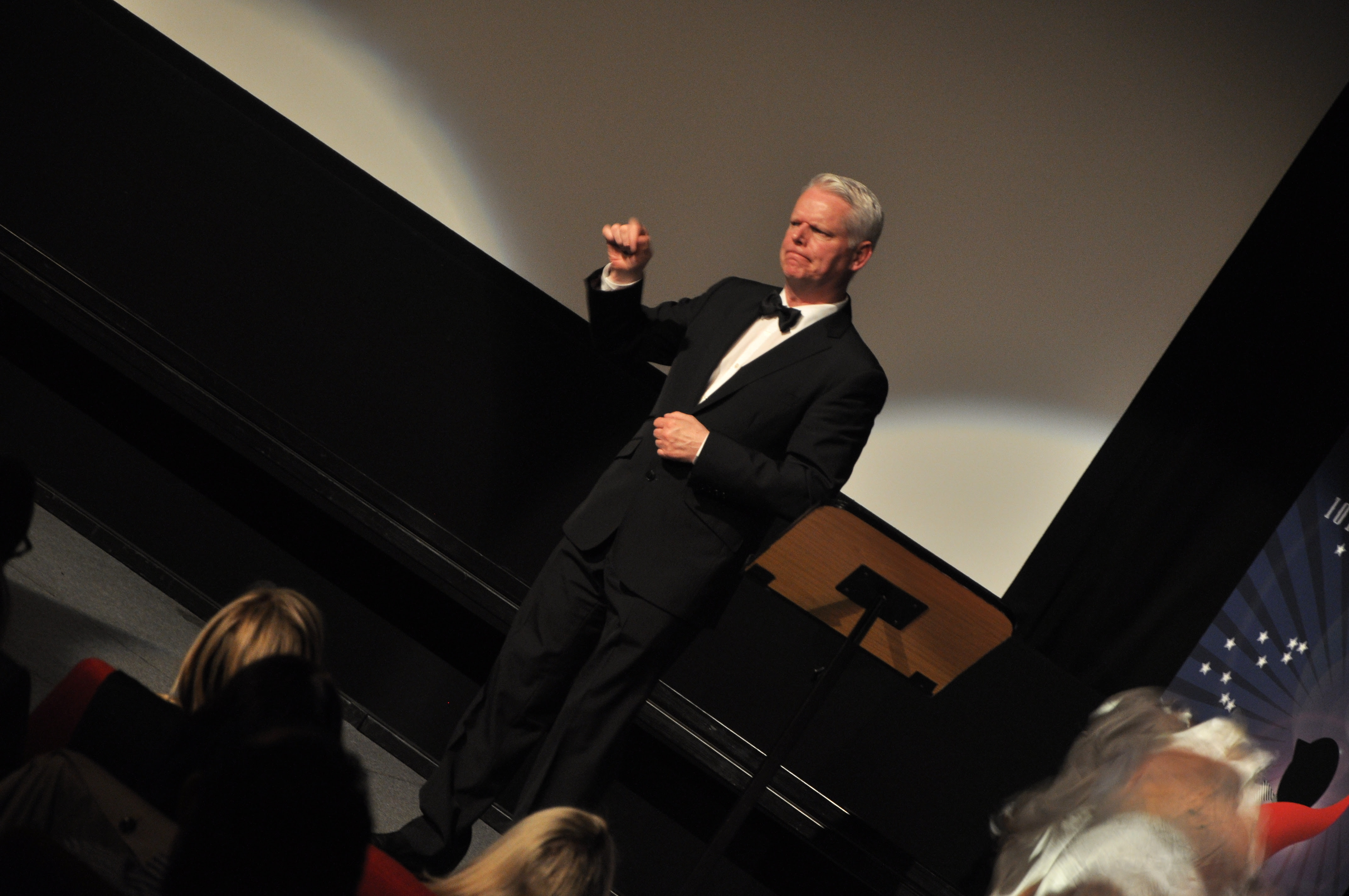 The Deaffest 2015 Film Awards Gala took place on Saturday evening, as visitors graced the red carpet leading into the cinema. The event began with a solo dance performance by Billy Read, whose professional career was launched here at Deaffest back in 2011. Hosting the Film Awards was Clive Mason, iconic Deaf TV Presenter. Clive led the audience through the evening's events welcoming on stage a host of deaf artists and performers: the hilarious Matt Gurney performing for Deafinitely Theatre's HUB Showcase, Giuseppe Giuranna displaying exquisite VV skills, dancers Billy Read with Ava Marissa Blake, and comedian John Smith who was on good form giving his unique take on the Deaf world. John was among the many guests at this 10th Anniversary who were present at the very first Deaffest in 2006!

"It's wonderful how you bring together so much amazing talent" - Visitor

Choosing the award winners were a judging panel of film and media experts consisting of Linda Day, Founder and Director of Signworld, Tracy McCoy, senior lecturer and course leader for Video & Production in the School of Media at theUniversity of Wolverhampton, and Joel Kellhofer, Director of award winning film production company AC2.com.

The winners of the Deaffest 2015 10th Anniversary Film Awards Gala were: 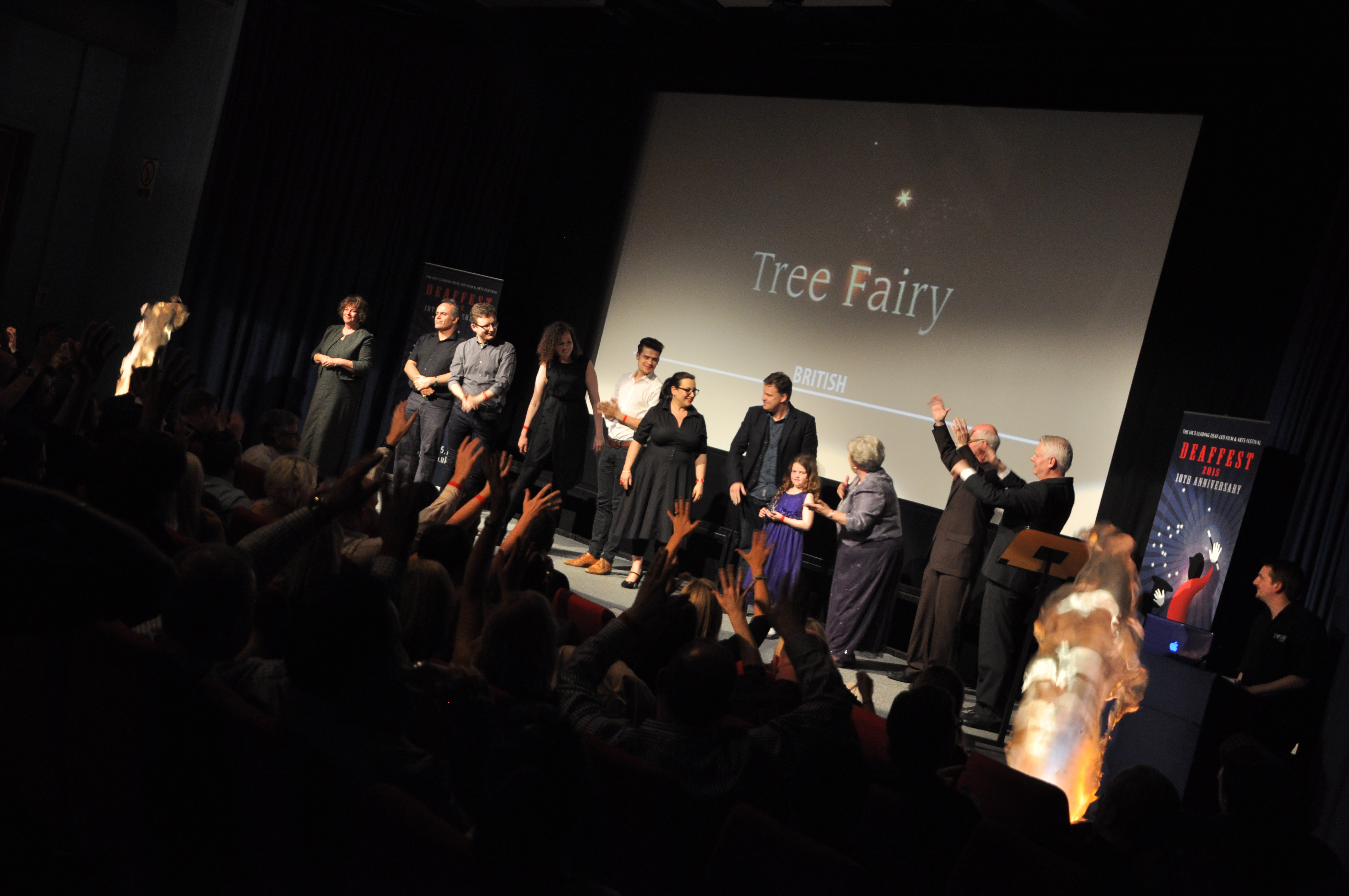 Later, the courtyard set the scene for the Late Night Deaf Party with stage performances by BSL poet Richard Carter and his workshop students, freestyle dancer Chris Fonseca, Giuseppe Giuranna and Billy and Ava. Other spontaneous appearances by Jerry Hanifin, Ashley Kendall, Louis Neethling and many more. Beethoven's Nightmare, the deaf rock band all the way from America played into the early hours. Sunday morning commenced with The Young Deaffest nominated films which were screened to an enthusiastic audience, followed by a selection of non-competition films, then Dr Paddy Ladd's seminar on Deafhood. The afternoon highlight for many attendees was the screening of the Marvel Film, Avengers: Age of Ultron. Later in the afternoon was a film discussion panel led by filmmaker Louis Neethling. The panel consisted of actor Matthew Gurney, filmmaker David Ellington and Zebra Access’ Director Nikki Stratton. The burning issues in the deaf film making industry were discussed such as the portrayal of Deaf presenters, the lack of regional sign language, using a BSL monitor and how actors should be provided with training. Back in the main cinema the American film No Ordinary Hero: The SuperDeafy Movie was screened for the first time in the UK, and was extremely well received.

As early evening approached, the Hearts Aglow Steelpan Group could be heard bringing the sunny sounds of the Caribbean to Deaffest. Amazing floor magician Mark Barber, AKA Infiniti, stalked his victims dressed as a circus master in a tall top hat which extended his already imposing stature to improbable proportions! Beethoven's Nightmare again rocked into the night, seen from afar as pulsating lights escaped through the glass roof of the Chubb Building making it truly a Light House.

Without a doubt this 10th Anniversary has been the biggest, the most fun, the most crowded, the most exciting and by all accounts the most appreciated Deaffest we have ever known! Our thanks go to the funders and sponsors and to those who joined in, supported, volunteered, worked hard and performed. All their dedication and enthusiasm has helped make Deaffest not only a success that will go down in Deaf history, but they have also made it a magical memory.
More