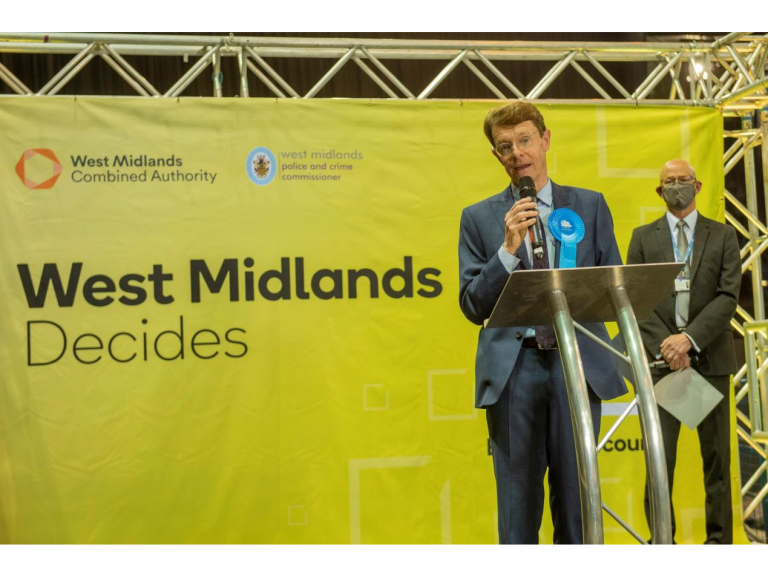 Andy Street has been re-elected as Mayor of the West Midlands.

The Conservative Party candidate was declared winner of the Mayoral election following the count at the Utilita Arena Birmingham this afternoon (Saturday May 8).

Mr Street, a former boss of John Lewis, will continue to serve as Mayor for another three years and as chair of the West Midlands Combined Authority (WMCA) and its cabinet of the seven metropolitan West Midlands council leaders.

Following the declaration, Mr Street said: "It’s an honour to be elected again. We know we have a great deal to do to recover from the pandemic, but we have laid out very clear plans around the economy, transport, housing, skills and the environment. Now we have to get on with the work ahead of us. Thank you to everyone who has put their trust in me."

The election, on Thursday May 6, saw votes cast in Birmingham, Coventry, Dudley, Sandwell, Solihull, Walsall and Wolverhampton. A total of 626,180 people voted – a turnout of 31.23 per cent.

Mr Street secured victory over Labour candidate Liam Byrne by 314,669 votes to 267,626 after the second preference votes were counted.

Having a West Midlands Mayor is a key part of the devolution deal struck between the WMCA and Government in 2016, giving the region and its elected politicians greater powers and control over how funding should be spent.

Mr Street will have responsibility for some of the biggest issues affecting the lives of around 2.8m people in the West Midlands.

His powers include control over long-term budgets from central government to:

As Mayor, Mr Street will also continue to lobby Government and act as an advocate and ambassador on the global stage, championing the West Midlands and the issues that matter most to local people.

He will hold office for just three years instead of a four-year term after the scheduled Mayoral election in May last year was cancelled due to the Covid-19 pandemic.

The first preference results were:

Following the counting of second preferences the  totals were:

Ding ding, the next stop for the vaccine bus is Bilston
Sign up for offers
Sign up for what's on guide
Popular Categories