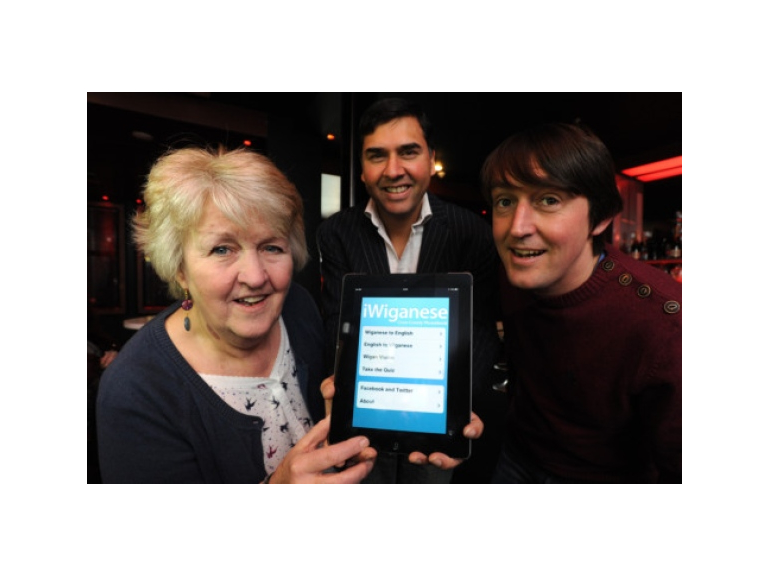 From its top sporting sides to its proud industrial past, the town is steeped in tradition and pride.

One thing that separates Wiganers from the rest, is the accent and dialect of its proud inhabitants.

Just more than a year ago now, a mobile phone app was released which helped those outside the town understand “Wiganese”.

And now, after 25,000 downloads and a five star rating, it is being relaunched by its developers with so much more added onto it.

Fabric, formerly known as Athernet, have designed a new “iWiganese” app, which includes a quiz and even more phrases.

The Evening Post appealed for potential new voices for the new app to contact Fabric and, as a result, new voices were found for both sexes.

“We thought that in this day and age, we needed to do more so decided to move things on.

“So we have more phrases to translate and a quiz as well.”

The company is also working with the council and hopes to continue to update the app with another special addition.

The aim is for users to be able to use the app interactively when travelling around town by using QR readers at various hotspots around town.

This is where the smart phone scans a special sign and information on that location is given.

A quiz on the Wigan language is also included and there are now sharing links to publish results on social networking websites Facebook and Twitter.

On the original app, there was only a male voice pronouncing Wigan phrases; another thing Fabric was hoping to expand on.

And the company picked Ian Schofield of Springfield and Ann Ashcroft from Lamberhead Green to relay the Wiganese.

Ajay added: “We were so pleased with Ann and Ian who played the ‘Mr and Mrs’.

“They fit into their roles superbly and both seemed so comfortable with all the phrases.

“We have to say a massive thank you to Jon Cooper and the team at Grim Up North who also helped us put this together.”

Both Ian and Ann said they were delighted to get involved.

Ian said: “It was great, I really enjoyed doing it.

“It’s something different isn’t it! My kids are really excited about it.

“I just saw something online about it and thought I’d give it a go. I knew most of the phrases but some were new on me too.”

Ann’s family is steeped in Wigan tradition with her grandmother a “Pitt brew lass”.

She said: “I saw something in the paper and just fancied doing it.

“I told them about my grandmother, who was also from Lamberhead Green, and the whole history in my family.

“It was great doing it and I’m looking forward to hearing how it sounds.”

The app will once again be free to download.