Sorry this event has now expired. But please check out other great events from the best of Weston super Mare.
i
Based on the latest Government guidelines, some events may be postponed, cancelled or taking place online. Please check with the organiser for the latest info. 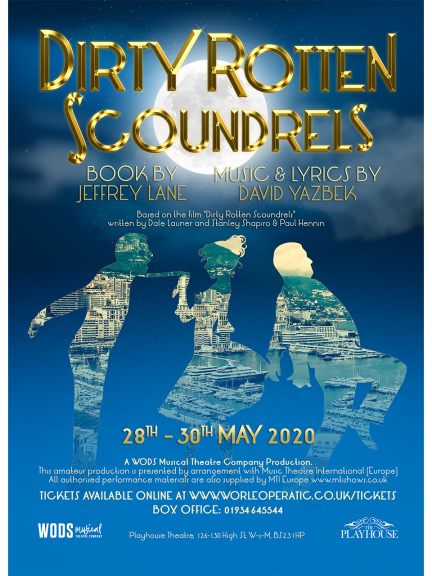 The fantastic WODS Musical Theatre Company are back at The Playhouse this spring with their next hilarious production, and Weston’s debut of Dirty Rotten Scoundrels.  This side-splitting musical is based on MGM’s 1988 hit film with a delightfully jazzy score by David Yazbeck (The Full Monty). Nominated for eleven Tony awards, this show is sure to have you laughing from start to finish.

The story follows Lawrence Jameson, a sophisticated swindler, talking rich women out of their money in a hotel on the French Riviera.  Along the way he meets Freddy Benson, a humble, yet novice con man whom he takes under his wing. After realising that the hotel is not big enough for the both of them, they make a deal, that the first to con American heiress and hotel guest, Christine Colgate will remain in the resort, while the loser must leave.

The threat amongst them? The Jackal, a mysterious con artist sweeping through the Riviera with the same idea as Lawrence and Freddy, preying on the wealthy and cashing in on their success.

Through the art of seduction, sarcasm and swindling, they go head to head. Two con men, a beautiful woman and the elite of the French Riviera collide in this hilarious farce.