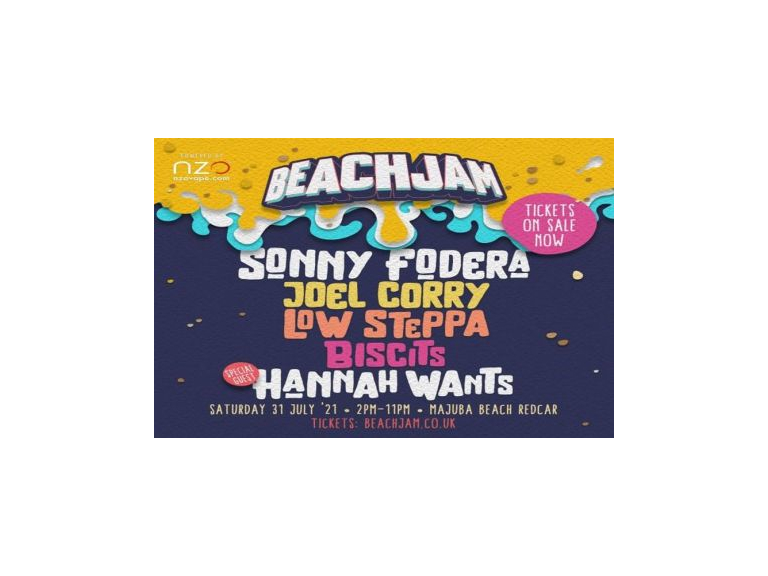 i
Based on the latest Government guidelines, some events may be postponed, cancelled or taking place online. Please check with the organiser for the latest info.
BeachJam 2021
BeachJam 2021

BeachJam have just announced their hotly anticipated return to Majuba Beach and the date for your diary is Saturday 31st July 2021.


BeachJam have just announced their hotly anticipated return to Majuba Beach and the date for your diary is Saturday 31st July 2021.

Fans can expect organisers to be pulling out all of the stops for their eagerly awaited return including a stacked up line up for the first of their 2021 events. Internationally renowned DJ / Producer Sonny Fodera will be kicking off the event in July alongside very special guest Hannah Wants, as well as Chart topper Joel Corry, Low Steppa, Biscits and a whole load more.

Sonny Fodera;  the revered DJ / Producer and Remixer, who wowed crowds back in 2019 and just completed a sold out UK tour for his new album ‘Rise’, will bring his thrilling style of authentic house music back to Majuba Beach on Saturday 31st July. A pacesetter in his own right and a citadel of bouncy, assertive grooves, Fodera observes crowds and converses with the dance-floor with an air of someone who has seen it and done it all.

Joining Sonny Fodera we welcome special guest Hannah Wants who is without a doubt one of the brightest stars on the electronic music scene with a loyal fanbase - not to mention a super busy DJ dairy that continues to develop and flourish on a worldwide scale. Since winning Mixmag’s Best Breakthrough DJ Award in 2014, Best DJ at the Bass Music Awards in 2015 and an iconic Mixmag cover in 2015 that ended up being the best-selling issue of the entire year, Hannah has quickly risen to the top tier of electronic music, with a slew of tracks signed to the likes of Food, Dirtybird, Toolroom and Virgin, a chart-chomping smash in ‘Rhymes’ and a Radio 1 residency;

Joel Corry is also set to take to the BeachJam decks on Saturday 31st July. After smashing records in summer 2019 with the most Shazammed track in one day of his tropical house banger ‘Sorry’, thanks to its appearance in that other summer sensation; Love Island, he quickly rose through the UK charts landing in the UK Top 10. Not one to rest on his laurels, he quickly followed this up with another track ‘Lonely’ as well as his huge monster track  “Head and Heart’ alongside MNEK which hit the  number 1 spot  across four countries including the UK  in 2020.

Next up, without a doubt one of the most vital and influential house music artists of the present day; Low Steppa, will also be taking to the decks at the summer-time festival. For many years Low Steppa has been producing some of the finest house and bass music around and touring the globe and remains very much at the forefront of the electronic dance music scene.

Last but by no means least, taking to the main stage BeachJam welcomes Southampton born Biscits to the decks. As 2019’s highest selling artist on Beatport, he has collaborated with many artists including Solotoko’s Head honcho Sonny Fodera on the monster track ‘Insane’ and has been championed by the likes of industry stalwart Pete Tong, Danny Howard and MistaJam on Radio 1.

Saturday 31st July 2021 will be the first event to be held back at the iconic coastal venue, almost two years to the day since it’s launch back in 2019, after all planned 2020 events were unable to go ahead. Organisers, performers and fans alike have all been eager to get back to the stunning seaside location and rest assured BeachJam will be returning to Majuba Beach stronger than ever with a whole host of extra surprises for the 2021 summer series.

Tickets for BeachJam 2021 Part One go on sale at 6pm on Wednesday 24th February 2021 from just £20 + BF, with VIP tickets also available which include the added benefits of fast track entry and access to the VIP area with it’s own private bar, VIP toilets and VIP stage over looking the main stage action.

TICKETS ON SALE AT WWW.BEACHJAM.CO.UK AT 6PM ON WEDNESDAY 24TH FEBRUARY 2021.

Tickets priced from £20.00 + BF / VIP Tickets from £35 which include Q-Jump, VIP Arena access with it’s own bar, toilets and viewing platform. (Over 18s Only. ID Required)