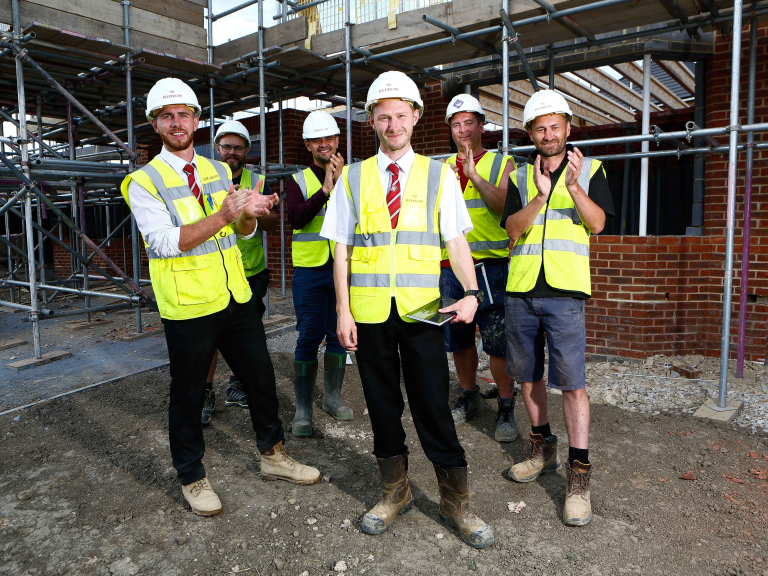 Wakefield site manager Ben Scargill is bringing his expertise to a new development of 120 homes, after winning a top award.

The 27 year old, will oversee the construction of Redrow’s City Fields development after gaining a coveted Quality Award at the NHBC’s annual Pride in the Job Awards.

With more than 16,000 managers competing for the awards, this year’s winners have been hand-picked for their excellent standards on site. Following 12 months of rigorous judging, these first round winners excelled and will now go on to compete for the Seal of Excellence and Regional Winner titles.

Ben, who lives with his partner and son, aged 10, in Barnsley, West Yorkshire, is a Redrow Yorkshire site manager and has earned the sought-after accolade for the first time, after working for the company for two years.   Ben, who previously led the team at the company’s Churchfields site, in Green Hammerton, has now moved to Redrow’s prestigious new City Fields development, an exciting development of 3 and 4 bedroom homes near Wakefield in a semi-rural location.

Said Ben: “A Pride in the Job Award is one of the best things a builder can win because it demonstrates we deliver the highest quality for our customers.

“It’s absolutely fantastic to achieve and a real tribute to my team at Churchfields which shows we worked hard, had a good team on site and put in the long hours to guarantee the quality of the homes.”

Ben was one of three winning site managers in the Yorkshire region for Redrow.

John Tutte, Executive Chairman at Redrow, commented: “We’re pleased to report that a record number of our site managers received a Pride in the Job award from the NHBC. It’s testament to the fantastic work and commitment from our team that we are able to pick up so many awards this year.

“I am proud of all of our award-winning site managers. I wish all of today’s winners the very best of luck for the next round in the autumn.

“The increasing number of high-achievers at Redrow is testament to the company’s commitment to learning and development.”

Redrow, which this year secured the top Five Star rating by the Home Builders Federation (HBF), based on a survey of its customers in which more than 90% said they would recommend Redrow to a friend, is also the only major housebuilder to have its own dedicated housebuilding degree. The degree is available to all company’s employees, including site managers, ensuring that employees not only excel in their role but work towards achieving professional recognition.

Following the announcement of the first-round winners, all successful site managers are invited to attend the Regional Award ceremonies held in the Autumn to celebrate their exceptional achievement and go on to compete for a Seal of Excellence and a Regional Award in their respective categories.

Issued for & on behalf of Redrow Homes (Yorkshire) by Active PR

APARTMENT LIVING IN WAKEFIELD WITH A HOMELY FEEL

APARTMENT LIVING AT WAKEFIELD DEVELOPMENT AN ARRESTING OPTION
Sign up for offers
Sign up for what's on guide
Popular Categories
By clicking 'ACCEPT', you agree to the storing of cookies on your device to enhance site navigation, analyse site usage, and assist in our marketing efforts.
For more information on how we use cookies, please see our Cookie Policy.