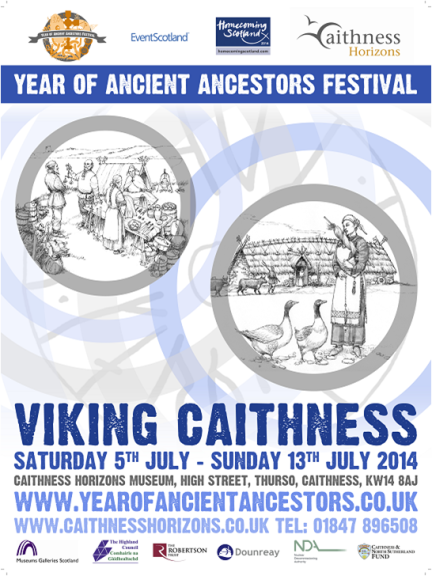 To celebrate and promote the unique Pictish and Norse heritage of the Far North of Scotland Caithness Horizons Museum in Thurso has received funding from Museums Galleries Scotland, The Robertson Trust and the Highland Council to develop a new Early Medieval Sculpture exhibition. The exhibition will be the centrepiece of the Museumâs Year of Ancient Ancestors Festival as part of the Scotland-wide Homecoming 2014 celebrations.

The Museum has received funding from EventScotland, the Caithness and North Sutherland Fund, The Highland Council - Highland Culture Fund and Museums Galleries Scotland to run a year long programme of living history events that will bring the Far Northâs Pictish and Norse heritage to life.

The Pictish element of the Year of Ancient Ancestors Festival will run from 15th â 18th May and will include special events such as storytelling, a one-off performance by Thurso Players Juniors, talks and art workshops.

From 5th â 13th July the Museum will be going Viking mad with storytelling, arts and craft workshops and a Viking living history encampment and battles run by Glasgow Vikings.

During the weekend of the 24th â 25th October the Museum will be running a Norse themed âVetrablotâ or harvest festival event.

For further information about the Year of Ancient Ancestors Festival visit

Tourism in The Highlands
To see the businesses in our Tourism section, please click here.
Downloads
Latest Articles