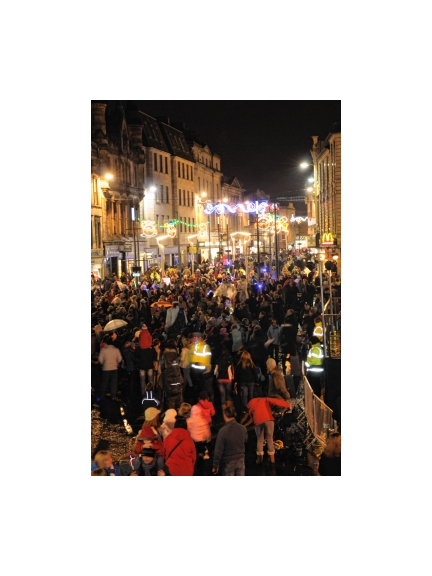 Sunday 17th November at 6pm starts the official countdown to Christmas getting the celebrations underway in the Highland capital when the Inverness Christmas lights are officially switched on by Provost Alex Graham and Santa Claus.

The festivities start at 5.30pm when Evanton based Arts in Motion will animate Inverness Town House. Inverness, IV2 4SF with a spectacular projection display and STV Presenter Nicola McAlley will take to the stage to host a 30 minute musical show featuring TFX Performing Arts Academy, Fiddle Forte, Stagecoach Theatre Arts Group and Ashley and Ben. Also taking part in the show will be performers from Fly Agaric and Mascot Madness.

After the lights are switched on, the Provost and Santa will make their way to the Old High Church for the city’s traditional Christmas Carol Service “Ding Dong Merrily Old High” hosted by the Reverend Peter Nimmo which starts at 6.30pm. The short service is aimed at families, and children of all ages are very welcome to attend the event, which this year will feature ’Out of the Box’ and their puppets who will be telling the Christmas story in their own inimitable way.

The roads that will be closed will be...

The closure will affect vehicular traffic, but pedestrian access and access for emergency vehicles will be maintained at all times.

Alternative routes for vehicles will be available using...

What’s On in The Highlands this Weekend 21st to 23rd July?
Sign up for offers
Sign up for what's on guide
Popular Categories
We use cookies and similar technologies to improve and personalise your user experience, deliver add personalisation tailored to your interests on third party platforms and analyse our web traffic. Click 'ACCEPT' if you would like to allow all cookies. For more information on how we use cookies, please see our Cookie Policy. Learn More