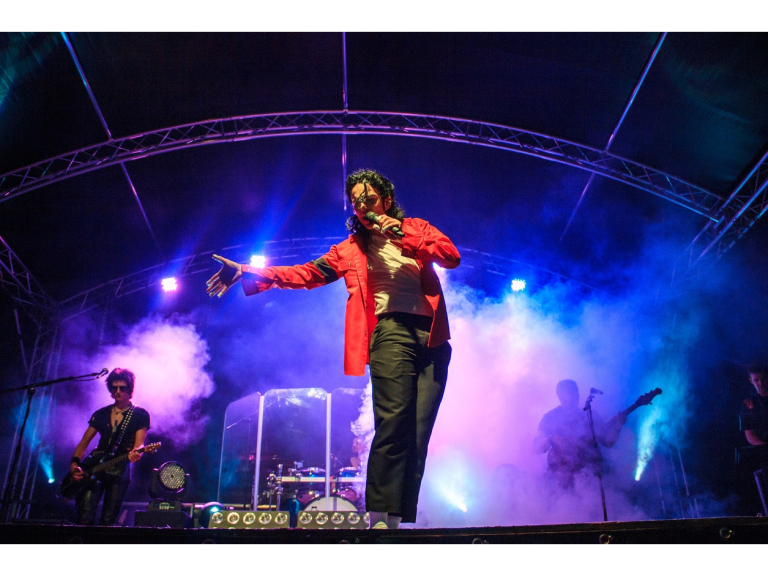 The Phoenix Festival is delighted to announce that bringing the 2 day festival to a thrilling close on Sunday 30th August are special guests ‘Michael starring Ben’, the greatest tribute to Michael Jackson in the world! So come along to the Abbey Grounds to “Shake your body, down to the ground” and “Don’t stop till you get enough”!

‘Michael starring Ben’ features the UK’s ultimate Michael Jackson tribute star Ben Bowman who has been touring Europe and the UK, including the legendary London Palladium, with this spectacular show.
Ben’s mesmerising, energetic and dynamic performance, will give you a taste of what it was like to see Michael Jackson live in concert.

His band, dazzling costumes and iconic dance routines, promise to deliver the most authentic, lively and powerful re-creation of the legendary superstar that audiences will see anywhere. Ben will showcase the greatest hits of Michael Jackson and the Jackson 5 and will include Beat It, Billie Jean, Thriller, Man in the Mirror and many, many more.

A spokesperson from Michael starring Ben said: “We are so happy to be special guests at this years’ Phoenix Festival and can't wait to give everyone a great show and celebrate the King of Pop with you!”

Get ready for a magnificent journey that remembers the man, the music and the magic.
Phoenix Festival organisers will announce other special guests in the coming weeks.
The Phoenix Festival takes place on Saturday 29th August & Sunday 30th August in the Abbey Grounds, Cirencester.

Any artists, bands, dance troupes, DJs or choirs etc. who are located in the Cirencester area that want to perform at the 2020 Phoenix Festival should get in touch via the website www.phoenix-festival.co.uk.
AND to help keep the Festival free any offers of in-kind, financial, or volunteer support are always gratefully received.