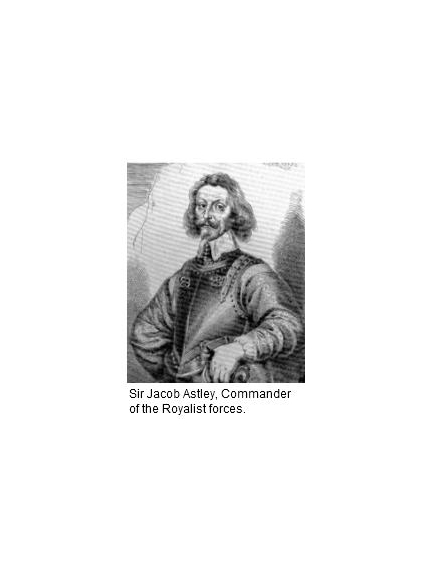 Sitting on a drum near Stow's market cross Astley is said to have uttered one of the most often quoted of all phrases from the war ‘Gentlemen, yee may now sit downe and play, for you have done all your worke, if you fall not out amongst your Selves’.

As such the historical importance of the battle far outweighs its scale. Public awareness of the battle is limited and there is little information for visitors to the town of the events that occurred on that day. The site of the battle was initially registered by English Heritage around the ridge lying to the west of the village of Donnington about two miles north of the centre of Stow. A monument has been erected by the residents of Donnington village next to a public right of way.

An attempt to enable improved access to this site from the adjacent road revealed that work sponsored by the Battlefields Trust provided a strong case for the site actually lying some distance to the south. This was subsequently adopted by English Heritage in an unpublished redraft of the original battlefield registration.

No previous survey of the battlefield archaeology is known to have taken place. There are reports of musket balls having been collected with a metal detector in fields to the west of Donnington village in the latter part of the 20th Century but it is judged that the intensity of collection was such as not to seriously damage the evidence on the site. The Corinium Museum in Cirencester holds a cannon ball said to come from the Stow battlefield, but its provenance is unknown along with the precise location of its discovery.

Permission has been obtained from the landowners to carry out a survey and a considerable amount of local interest has been aroused through the local media and a very successful event held in Stow with visiting speakers from the Battlefields Trust accompanied by members of the Sealed Knot batlle re-enactment society. The project would aim to accurately locate the events of the battle in their contemporary landscape using the modern techniques of battlefield archaeology, which have recently been so effective in locating the site of the lost battlefield of Bosworth (1485) and of enabling the detailed interpretation of the battles at Edgehill (1642) and Culloden (1746).

The project would be overseen and supported by professional archaeologists and subject matter experts working with The Battlefields Trust, the Stow Civic Society, amateur metal detectorists and local volunteers. Although the Lottery Fund have rejected our bid for their financial support, the Civic Society is determined to continue woth the campaign to establish the exact site of this most important battle in our country's history.

LAST CHANCE TO EMBRACE LUXURIOUS COUNTRYSIDE LIVING IN THE COTSWOLDS
Sign up for offers
Sign up for what's on guide
Popular Categories
By clicking 'ACCEPT', you agree to the storing of cookies on your device to enhance site navigation, analyse site usage, and assist in our marketing efforts.
For more information on how we use cookies, please see our Cookie Policy.