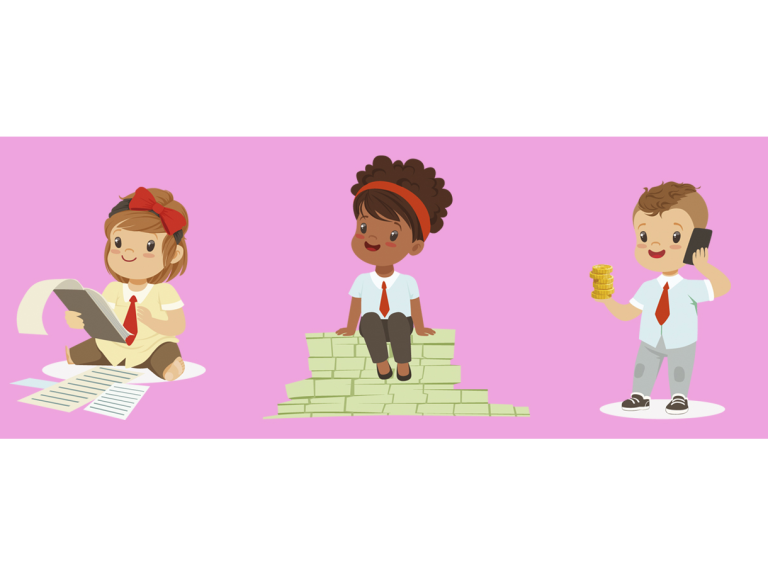 By the age of seven, most children’s attitudes towards money are fixed for life.1 Parents and grandparents can – and should – take an active role in developing the right habits and behaviours.

The first lesson children often learn is that saving today – by making small sacrifices such as forgoing sweets – could add up to something more worthwhile tomorrow, such as being able to afford a new bike.

Yet, with financial education not yet mandatory on the primary school curriculum, many children are missing out, “making it even more important to start the conversation at home,” says James Jones from Experian.2 “Encouraging children to discuss money matters from as young as four years old can help them develop positive attitudes, values and behaviours, giving them the best chance of being financially secure later in life.”3

Young children are receptive to advice – they also appreciate it. Here are three ways you can teach the children in your life about money.

Several studies suggest that the bedrock of financial education doesn’t relate specifically to money at all. It is about learning to take responsibility for yourself and a wider sense that what you do today has ramifications for the future.

It’s also about grasping the value of delayed gratification.

While children are young, they can learn to forgo immediate satisfaction for long-term benefit. This can be choosing to keep half a slice of cake until tomorrow, or learning to save their pocket money to purchase something they would like.

“The early years of a child’s life are all about habit formation,” says Rob Gardner, Director of Investments at St. James’s Place and co-founder of financial education charity RedStart. “Focus on building responsibility between the ages of four and six.”

Simple stories can help - his book, Save Your Acorns, includes squirrels who save some acorns and then go on to plant them, reaping the rewards later.

In our increasingly cashless society, where money can be spent at the touch of a button, it’s all the more important children learn the self-discipline that will guide their spending habits for life.

2. Teach the value of money

A child’s understanding of money is very important.

Receiving pocket money enables children to put good habits into practice, cementing them further. It can also teach numerical skills, and introduce children to the act of spending and saving while gradually increasing the responsibility they feel towards money.

Pocket money is an excellent way for them to distinguish between needs and wants. But, conversely, not everything should be monetised.

“It’s important to teach children that there are opportunities to earn money and that’s separate from chores and good behaviour,” Gardner notes. “…don’t get paid for clearing the dinner table, or loading the dishwasher, but maybe offering to clean Grandma and Grandad’s car – that’s a good way to start thinking about earning money.”

It’s important to remember that as money goes digital, children have little exposure to bills, checking change or counting money.

“Modern technologies step away from the physicality of money and also the emotional connection” behavioural psychologist Paul Davies says.4 Children see grown-ups tap or swipe to pay, and their first experience of spending money is likely to be an in-app purchase.

To teach children, then, you might start by introducing the value of money through physical change to build their emotional connection. Then, as they mature, you could introduce them to app-based pocket money services so they learn about digital money – and so you retain some control over their spending.

3. Include children in everyday tasks

Recent research shows that playing shop at home, talking regularly about money, making shopping lists together and setting family budget goals with children as young as three can help influence positive money habits that children carry with them for life.5

While discussing bills might feel taboo, home may in fact be the ideal setting for children to learn to budget.

“Early experiences provided by parents, caregivers and teachers which support children in learning how to plan ahead, in being reflective in their thinking and in being able to regulate their emotions, can make a huge difference in promoting beneficial financial behaviour,” says Dr David Whitebread,  developmental cognitive psychologist at Cambridge University.6

Whether you do the weekly shop online or in store, including children in regular budgetary tasks will give them invaluable, real-life experience as they head into their adult lives.

Learning good financial habits is a process that takes several years, but it need not be complicated. Crucially, the research consistently shows that it pays off to start early.

Are You Re-evaluating Your Financial Priorities As a Result of Coronavirus?
Sign up for offers
Sign up for what's on guide
Popular Categories