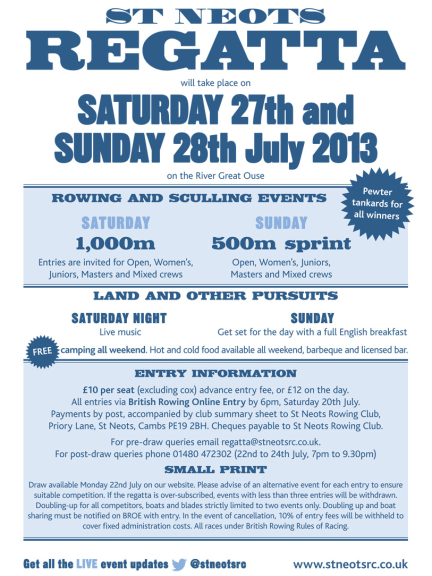 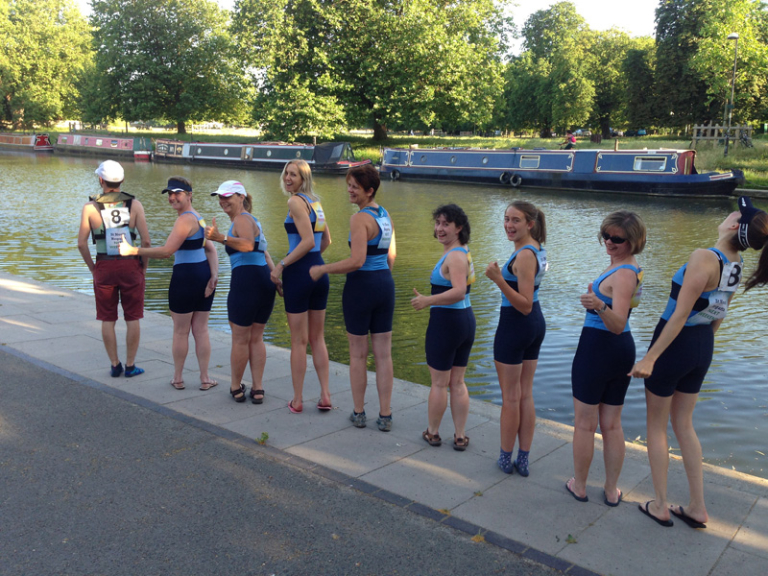 ST NEOTS ROWING CLUB GEAR UP FOR ITS REGATTA WEEKEND

St Neots Rowing Club crews have been busy competing over recent weeks in the run up to their prestigious two-day regatta this coming weekend.

Many of the junior squad and one senior took part in Bedford Rowing Club’s sprint regatta, with the only senior representative, John Knights, recording a win in his Masters G single.  In extremely hot conditions the juniors built on their experience and many of the races had good St Neots representation.

Last week saw the senior squad take part in the annual Cambridge Town Bumps event on the River Cam, rowing each evening between Tuesday and Friday.  The two eights, a men’s and a women’s, had a tough week trying to maintain their high status built up over the previous two years, and weren’t able to retain the John Jenner Trophy for 2013.  Both crews had an exciting week with the men recording one bump, one row-over and were bumped twice, one of which was almost certainly as the result of a broken seat which meant that the crew member couldn’t actually move on the slide. They finished in twelfth position out of 51 crews, whilst the women’s crew were bumped each night, getting to within half a length of the crew they were chasing on the last night, but were unable to to convert to a bump before being caught by a chasing crew.  On the previous night they had a narrow escape from a following eight that was unable to get round one of the tight bends and which ended up grounded on the bank.  They also finished in twelfth position out of 41 crews.

This coming weekend of 27 and 28 July sees St Neots Rowing Club running its annual two-day regatta on the Regatta Meadow, opposite the club.  The two days comprise 1k, side-by-side 2-lane races on Saturday, with races every 3 minutes, and  500m sprints on Sunday every 2 minutes.  Rowers from as far away as Maidstone, Tyne, Leeds and Nottingham will be competing, as well as crews from Barcelona and Germany. The age range spans from 12 to 80 years, proving that rowing truly is good for body and soul.  The racing provides exciting spectator viewing from the meadow, with cheers for the home team really spurring them on.  There is a licensed bar, as well as hot and cold refreshments throughout the weekend and full race commentary.   St Neots Mayor Andrew Hansard, will be presenting the winning pots on Saturday, from 5.30 pm.

‘Both junior and senior squads have worked hard at their various events recently, with some great results all round.  We look forward to this coming regatta weekend which is an important two days as we raise much needed revenue for the club to maintain and renew its boat fleet and keep the club buoyant.  Huge thanks go to the 100 or so volunteers who make the weekend happen, and we would love to see strong support from local residents and visitors alike.

The photo below is of the women's crew before boating prior to the last night of the Cambridge bumps, displaying advertising for our regatta, and clearly in relaxed mood before the explosion of effort in the race!  Cox is Chris Clarke, stroke Ali Brown, Helen Knowles, Tash Wilson, Lynne Taylor, Lou Rushworth, Ellie Sadler, Sarah Davies and Mia Hartwell at bow.