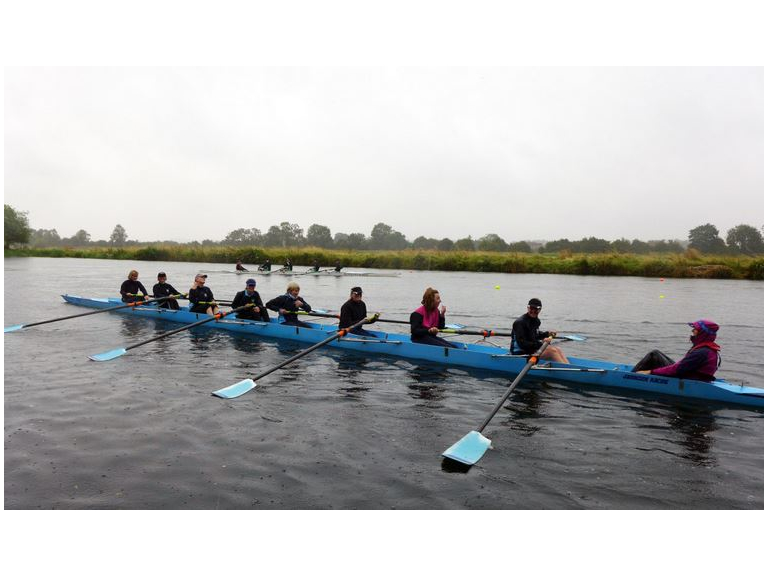 Celebrating an amazing 150 years as a rowing club, St Neots Rowing Club which is located on the River Great Ouse in Cambridgeshire has just hosted over 1,500 rowers from 56 different rowing clubs for the annual St Neots Regatta.

The largest 2 day regatta in the east of England, was a game of two halves weather-wise, with Saturday basking in blue skies while Sunday saw the rowers and officials donning waterproofs as the heavens opened.

The knock-out format meant that on Saturday there were 210 races and on Sunday there were 285 separate races for two boats at a time. Saturday involved boats starting to the north of St Neots and rowing flat-out down a 900 meter course with competitors having to tackle a dramatic right hand bend in the river. The closeness of the racing meant that several teams, including one of St Neot’s best crews came a cropper and ended up having to extricate themselves from the bull-rushes. Sunday’s challenge was a 500 meter, straight line sprint race, where even the smallest mistake could be the difference between winning and losing.

With each club’s distinctive colour schemes showing on their oars and the large number of rowing clubs from the immediate area including Bedford Rowing Club, Star Club, City Of Cambridge and Peterborough City joined by teams from as far afield as York City, The University of Portsmouth, Chester and Monmouth, the event was a riot of colour.

As ever, the race commentator was often heard declaring races to be running ‘bowball to bowball’ and the finish line officials had to make certain they were watching really carefully with some crews finishing literally within centimetres of each other.

St Neot’s rowers who had won many of the categories at the regatta last year had a much tougher time from the visiting crews this year and despite their being just over 100 trophies up for grabs, the home team only managed 2 class wins, plus a win in a composite Intermediate (IM2) eight. The composite eight won on Saturday and both full St Neots wins came on Sunday’s 500 meter course, with Shaun Parren winning in the Junior (16) single scull and Kate Lyster and Molly Harper winning in the Women’s Junior (16) double scull.

The top visiting club was Maidstone Invicta who won the top prize in 10 categories, closely followed by Norwich with 9 class wins and Northampton Rowing club who’s excellent rowers won made off with 8 sets of silverware.

Talking about the event, St Neot’s Club captain Ali Young said, “Thanks so much to everyone who helped make this year’s St Neots Regatta absolutely brilliant. A year of planning and thousands of hours of hard work by the regatta committee, club members, their families and dozens of volunteers meant that the whole thing ran really smoothly. In terms of results, with our rowers only winning two of the events, perhaps this wasn’t our year, but as part of our 150th anniversary celebration, I am so proud of how everyone did and delighted that there was such a fantastic mix of winners from the visiting clubs.’