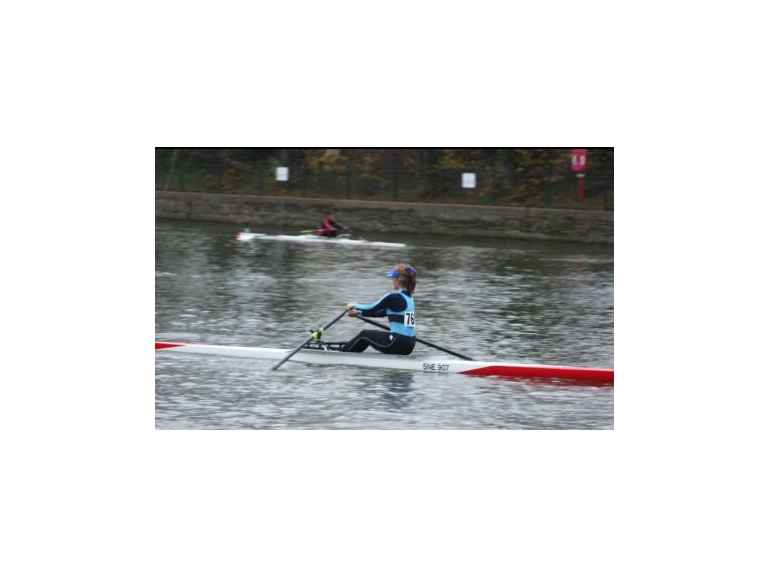 A number of junior crews from St Neots Rowing Club competed at Hampton at the weekend. Hampton is an extremely prestigious event, closely monitored by the GB team to spot potential talent and as usual, St Neots did themselves proud against clubs and schools like Eton, Henley and the like, who have far more resources at their disposal.

Highlight of the day was the dominance of the girls in the under 15 group, where Voirrey Taylor continued her recent form at this level. Voirrey has won several times of late in her single, came a narrow 2nd at Henley, then a clear winner at this event in Hampton (see photo). Zoe Adamson came second in the same category, so clubs up and down the country will be trembling in their boots at the thought of Voirrey and Zoe rowing in a double.

Joshua Davies and Fergus Mitchell-Dwelly were described in blogs ahead of the event as a "lethal combination", and so they proved again, beating old rivals Marlow and favourites Maidenhead, and coming a close 2nd on this occasion. They were the 2nd fastest boat of the day out of some 700 entries.

The girls’ quad of Voirrey Taylor, Kate Lyster, Molly Harper and Zoe Adamson had only trained once together as a crew prior to this event, but came 4th to the 3 Henley crews - 5 seconds between 1st and 4th, and a fraction of a second between 3rd and 4th. Henley considers themselves dominant in this category, but their coaches tell us they know St Neots are breathing down their necks now.

Last highlight was that Sam Clift and Adam Williams who came 3rd in their category, showing real promise for them in the future - both GB trialists earlier this year - watch this space.

The senior women put in winning performances at Star Rowing Club’s winter head on Sunday with the masters C coxed 8 crew and the masters D coxed 4 crew both winning their events.  Conditions were pretty good with no wind, although it was chilly and grey.  The ladies rated a consistent 31 and 32 strokes per minute respectively over the course which was just short of 2k.

The men’s crews fared less well in that they didn’t come home with winning pots, but they all gained in experience.  The IM3 eight came 3rd out of 5 crews, losing by just 9 seconds, the IM3 4 came 7th out of 8 in their first race in this combination, the Novice 4 came 5th out of 7 and John Knights came 5th out of 7 in the Masters F/G single event.

“Yet again the junior squad are putting in amazing performances and are keeping the rowing club very much on the map. It is testament to their continued dedication to hard training that is paying off.  And the ladies haven’t done too badly either. It was good to see rowers from the club attending both events over the weekend.”