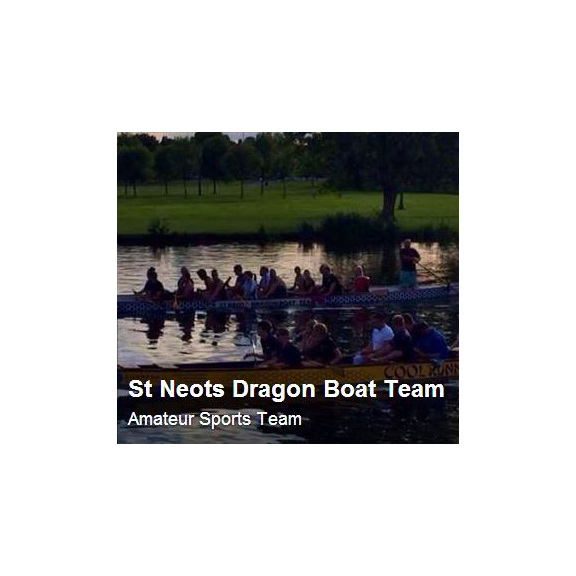 St Neots Dragon Boat Team rounded off their league season in style picking up silverware with a convincing win in the 500 metre Major Plate Final at the BDA’s London Albert Dock Regatta on August 31st. The team’s racing season is due to conclude across the weekend of the 20/21 September with the BDA National Cup competition covering racing distances of 250 metres, 500 metres and 1,000 metres.

With the racing season almost over, crew manager Dan Clarke has been busy organising the next challenge for the club, with the crew set to represent the town in the 2014 Great River Race;

London's River Marathon, it is a spectacular 22 mile boat race up the River Thames attracting over 300 crews from all over the globe, appealing to every level of competitor from those seeking a personal challenge, to serious sportsmen and women out to win their vessel class.

SNDBT are using the opportunity to raise some much needed funds for Addenbrookes Haemotology Day Unit ward, E10 who treat people with blood disorders such as leukaemia, lymphoma, myeloma and MDS and do curative, supportive and palliative care.

Clarke explained, ‘Competing in a river marathon requires a very different level of training to sprint race distances with a focus on strength and stamina. As a club we feel it is very important to give back to the community we represent and we took a joint decision this season that some of our sprint racing results may be slightly compromised in order to invest support in activities such as the St Neots Charity Regatta and to keep a keen focus on our distance preparations for the Great River Race. We have two very good reasons to raise money for E10 ward. Crew member, Rachel Wallis who has been paddling with us since 2008 is a junior sister on the ward and she will be one of the competing members for this year’s team in the GRR.

Another SNDBT paddler, Damian Stone has been a patient on the ward and has received fantastic treatment from the staff there who perform amazing work. Damo has paddled for us for many years and we sincerely hope to have him back in our boat very soon once he has recovered.’

You can support the team’s efforts by donating to the Addenbrookes Charitable Trust via the JustGiving site www.justgiving.com\sndbt

www.stneotsdbt.co.uk You can also find us on