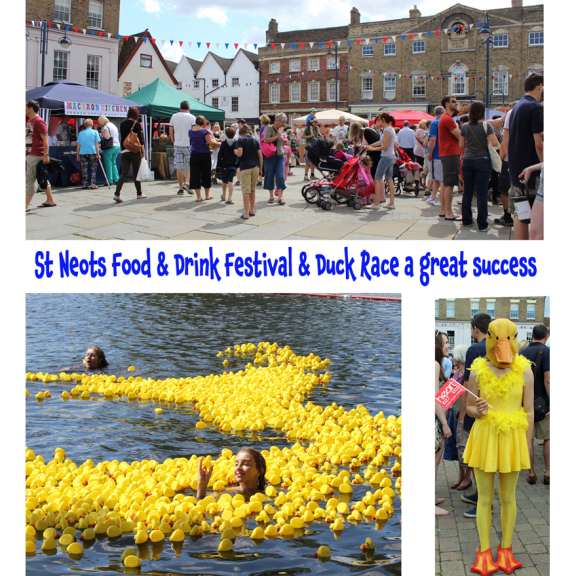 Thousands flocked to St Neots town centre to enjoy the town’s debut Food and Drink Festival on Saturday 3 August. The Market Square was awash with the sights, sounds and smells of people enjoying the festivities, sampling and eating great food. Crowds gathered to enjoy the live music put on by Wham and George Michael tribute act Whamtastic, as well as St. Neots Singers, Subject to Change and Tom Bryans.

Children could be seen enjoying the many activities put on for them including sand art, face painting and glitter tattoos. The Heart FM Radio Angels also came down to hand out goodies to the children.
At 1pm came the gastronomic highlight of the day, when TV chef and St Neots resident, Dale Pinnock came out onto the square to do cooking demonstrations sampling recipes from his new book. He was also on hand to do book signings for his Medicinal Cooking book, on sale at Waterstones in St Neots.

By far the highlight of the day was the charity duck race at 2pm. Tickets were sold out before the race with over 1700 yellow plastic ducks being launched into the river by the Mayor and special guest Stephanie Duker, who received chemotherapy treatment at the Woodlands Centre at Hinchingbrooke Hospital.

After a long slog to the finish line the winning duck was pulled out of the water and first prize was awarded to 8 year old Alfie Skinner from St Neots, who took home a Kindle. Other prizes awarded to the top placed ducks included £100 Hotel Chocolat chocolate vouchers, £50 Barrett’s voucher, personal training sessions and much more.

Katie Williams, St Neots Town Centre Manager said “I am thrilled with the success of this event. The footfall in the town centre was the highest I have ever seen in my time as Town Centre Manager and I have received countless positive comments from the public about how much they enjoyed the day. Traders at the event were busy from throughout and some even had to re-stock when they ran out of supplies early! Town Centre retailers also benefited, with some commenting that Saturday was the busiest day they had seen in the town for years. It was a pleasure work with Be On Cloud Nine Events to put on this special event for the town and we will definitely be bringing the Food Festival back to St Neots next year in the hope that it will grow and flourish even more.”

Buying or letting a house in St Neots

ALL FEMALE ST NEOTS ESTATE AGENCY LAUNCHES LOCAL DOMESTIC ABUSE CHARITY
Sign up for offers
Sign up for what's on guide
Become an author
Popular Categories
By clicking 'ACCEPT', you agree to the storing of cookies on your device to enhance site navigation, analyse site usage, and assist in our marketing efforts.
For more information on how we use cookies, please see our Cookie Policy.