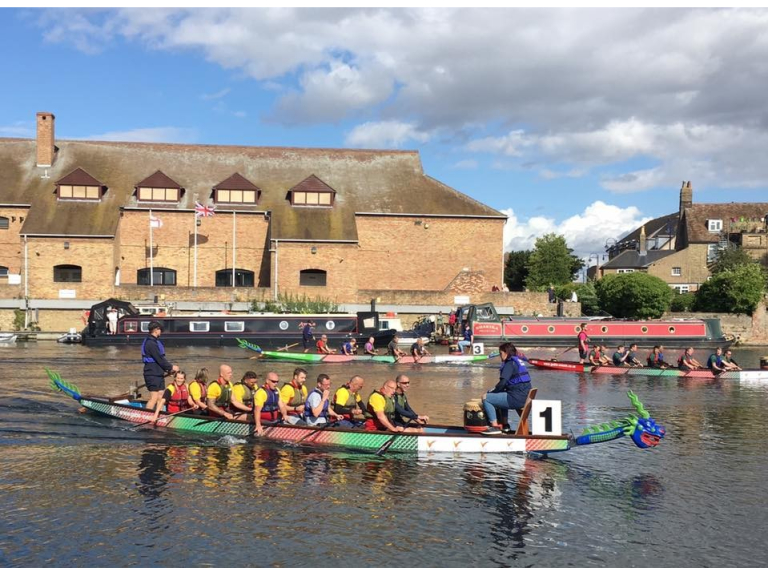 After a stormy night the rain cleared and the charity crews descended on the meadow to set up camp and prepare for the big race.

Twenty crews took part in the race this year, comprising a mixture of corporates, sporting clubs and groups of friends. Racing lasted several hours, with each crew participating in three heats and the best performing crews then went through to the final rounds.

The dramatic races attracted thousands of spectators, who came out to support the amateur teams.

After a long day of fun filled racing the winning crews were:

It was a proud moment for the three crews who were all shocked to make the final. The winning crews were presented their medals by Rotary President Glyn Osbourne and the Deputy Mayor of St Neots, Cllr Charles Bober. First placed Wyton Warriors were then presented with the James Griffin Memorial Cup.

This year’s event also featured a junior race for three local scout clubs. The winning club, 1st Little Paxton Scouts did so well with their time (76.92) they would have beaten two of the main race crews. Second place went to 1st Eaton Socon Scouts (78.73) and third place to 2nd St Neots Scouts (79.76).

The event was organised collaboratively by St Neots Town Council, the Rotary Club of St Neots St Mary’s and St Neots Dragon Boat Team. The purpose of the event is to raise money for local charities, increase the profile of dragon boating as a sport and promote St Neots’ best assets – the river and beautiful parkland.

Russell Turrall, Crew Manager from winning team Wyton Warriors of RAF Wyton said about the event: “We were particularly struck by how well the whole event went, everything appeared seamless and I know how much effort goes into making something seem effortless, it was greatly appreciated by all of us.”

This year’s race was held in aid of Mind, the mental health charity, which has a branch in St Neots. Profits from the event will also donated to local organisations, supported by the Mayor of St Neots Charity Fund.

PRESS RELEASE 2017
Groups which will benefit from the event are the 2500 Air Cadets, Bushmead School all weather pitch fund, Priory Infants School sensory garden project and Switch Now an organisation that supports young people with learning difficulties to get work experience.
Funds collected from onsite car parking, programme donations, crew entries, corporate sponsorship and advertising will all be donated to the charities. The total figure is still being compiled and will be announced shortly.

For spectators, there was plenty of bankside entertainment to keep all the family entertained. Local community radio station, Black Cat 107FM kept crowds entertained with their lively and hilarious race commentary.

A dedicated kids’ activity area included live entertainment from Mrs Bubbles and local community group Vir2oso provided free arts and crafts activities for children of all ages.
Katie Williams, Town Development Manager at St Neots Town Council, who co-organised the event said:
“It is such a pleasure to organise this event, which is enjoyed immensely by competitors and spectators alike. Its success would not be possible without our co-event organisers at St Neots Dragon Boat team, whose volunteers dedicate many hours to train the novice crews in advance of the race and the Rotary Club of St Neots St Mary’s whose members assisted with securing advertisers for the programme and provide several volunteer stewards to help manage the event on the day. Their assistance is invaluable and these groups are a true asset to the local community and town of St Neots.”