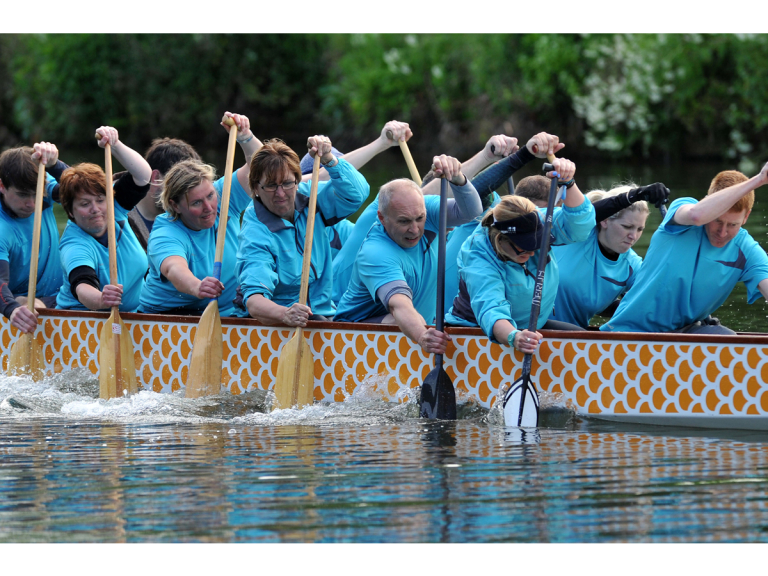 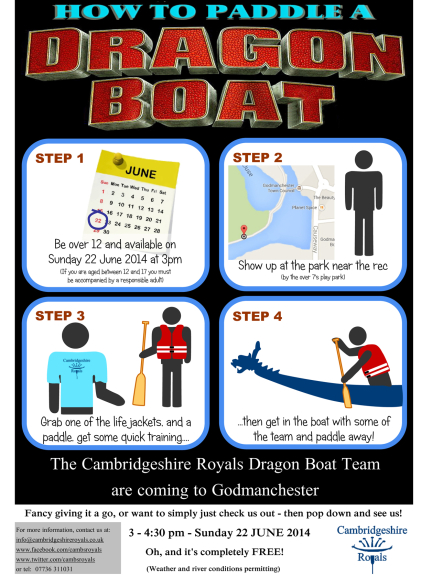 A few weeks ago a dozen dragon boat paddlers got together and dreamt of starting their own team in the area.  To their surprise they did, and now 7 weeks after officially launching the club on 21 April 2014 (the Queen's birthday!) - how did they do this?

The twelve founding members of this new club were all previously members of the St Neots Dragon Boat Team, but they felt the time had come to branch out and do it for themselves!  A couple of sponsors later (A1 Footwear and Brite Styles), support from the British Dragon Boat Association (BDA) and with the help of other local companies and individuals, the dream quickly became reality.

Newly appointed Chairman - Brian Samuel said: "There has up until now only been one team in East Anglia, and in order that we can grow and promote the sport in this region, we started up this new club.

"I am very excited to be part of the 'Cambridgeshire Royals'. I have never been involved in a club that has so many members which are so passionate about their sport.  The club is growing fast and I am happy to say that the new members that we have already recruited have been openly welcomed, which is testament to the enthusiasm and friendliness that surrounds this club."

The Royals are based at the St Neots Marina in Eynesbury and are now actively recruiting to their already growing member base, to date membership is rapidly approaching thirty.

The club's name evolved after the team wanted to look into making the club as geographically inviting as possible, and with the Royal connection to Cambridgeshire, the team found their name.

Kitted out in Cambridgeshire Blue, "The Royals" are members of the BDA and are planning to debut into the dragon boat racing world at the BDA Race Event being held in St Neots on 6 July 2014.

Why not pop down and meet the new club that everyone is talking about - no initial outlay required and the club are fully equipped with paddles, lifejackets and a qualified helm.

Further details about the club can be found on their facebook page:  www.facebook.com/cambsroyals or contact them either by email at: