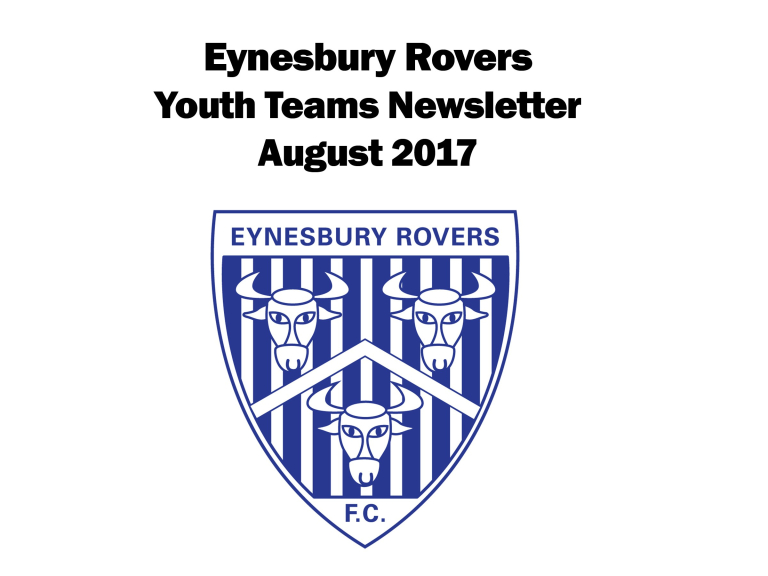 We have two new sponsors that are helping support us this season.

We are pleased to announce that Data Wolves and Ideal Software will be our newest sponsors and partners for the coming 2017-18 season!

MD's Gary Taylor (DW) and Paul Williams (IS) have kindly offered to help support the team, which is fantastic.

Data Wolves are our home kit sponsors and Ideal Software will be our new away kit sponsors.

On behalf of the team/club and parents I would like to say a massive thank you to Gary and Paul, we look forward to having both Data Wolves and Ideal Software part of the club.

We are a nearly formed Eynesbury Rovers team and look forward to the new season.

Coaches Jason Webb and Tony Mckie left Duloe Foxes at the end of last season and now take over at Eynesbury Rovers as the Whites management team.

Harry Williams was signed from Biggleswade and Luton Town Academy who has impressed all summer and is currently playing up a year!

Ade Bodede signed from St Neots Town Academy is another big signing by the team and adds class to the front line.

Reon Falconer another signed from Mid Beds Tigers and another who is playing a year up, shows potential to do very well at the club. Reon has had a great pre season scoring lots of goals in the summer tournaments.

Our highlight is a trip away to London to take on Arsenal ladies u10s where we will face our ex Player Francesca Hamer who signed for the Gunners this week.

Everyone at the club wishes Francesca all the best for the future at a top professional club, we are all very proud of her achievements and are sad she is leaving us but we will all be watching closely as she develops into a top player in the women's game.

Eynesbury under 10 blues have had a successful pre-season playing in both the Priory and Paxton tournament and a successful friendly against Godmanchester midweek.

The blues start the season with the same team having successfully signed everyone from last seasons cup winning side.

The blues are also looking for a tracksuit sponsor for this year, if you are interested in this please call Carl on 07824858117

Eynesbury Rovers U12's are looking forward to their first season of competitive football in the Hunts Youth League. The side was started in March 2016 with mixture of U10/11's, some new starters and some more experienced players. The side would like to thank sponsors The Recruitment People, Kinesis and Abbey Roofing for their continued support. We hope to make everybody proud again this season!

Plus we are proud to announce our tracksuit sponsor Ten property Agents Our second kit sponsor is Sell New estate agents.

The Under 17s squad is nearly complete with eighteen players already signed on with possibly a couple of others joining, we should be up to twenty strong. This is an increase allowing for players to play up, something we have already experienced with four playing in a few games for the Reserves and one playing in the First team.

Our sponsors remain as the Bosphorus Restaurant in the Market Square St Neots.

Our sponsors this season have added kits, socks and rain jackets for the whole squad.

We have a few friendlies arranged for our new squad members to experience our playing philosophy.

Look out for updates in the local press....