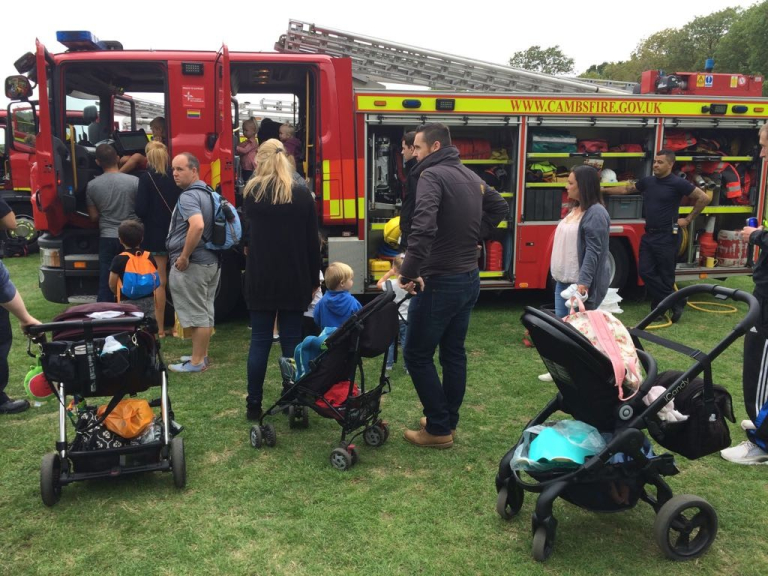 Our emergency services were able to join forces and engage with the local community at an Emergency Services Day on Sunday 19th August, which was organised by Huntingdonshire District Council and hosted at Hinchingbrooke Country Park in Huntingdon.

An estimated 4000 people attended on the day.  Children were invited to sit in the fire tenders and try on firefighting kit, while the firefighters spoke to parents offering advice about household fire prevention.  The Police were also there, with local officers speaking to visitors and showing them inside their vehicles.  The range of organisations involved ensured there was something to interest people of all ages, including  St John’s Ambulance, Cambridgeshire Search and Rescue (CamSAR), East Anglian Air Ambulance (EAAA) and Magpas.  Visitors also enjoyed fairground rides and food and drink stalls, and were able to show support to many smaller charities who attended to highlight their cause.

Animals were also represented as charities such as the RSPCA were also on site, making it a spectacular show.  Police and fire dogs were in great demand.  They performed some demonstrations in the dog competition arena, which was set up by Cromwell Vets and St Ives Dog Training Club for their own dog shows on the day.

Councillor John Palmer, Executive Councillor for Partnerships and Well-being,  said: “This was a fabulous day showing just what can be achieved through amazing teamwork.  It would not have been possible without the support of Hinchingbrooke Hospital and Hinchingbrooke School, both of whom gave visitors a place to park, and our team of twelve-strong Hinchingbrooke Country Park volunteers stepped in as parking marshals.  It just would not have been such a success without all of them supporting the day.  The district wide community really was in full force and it goes to show how much good will is out there.”