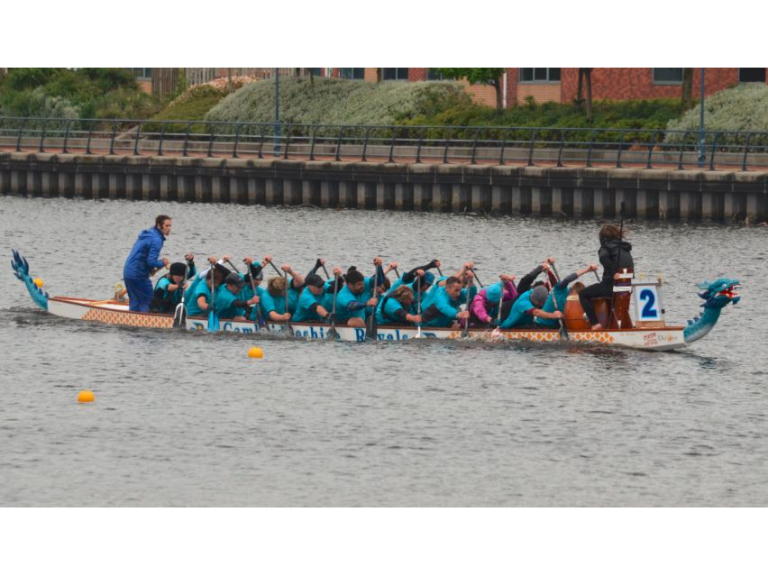 Two fourth place finishes ensured maximum points for the Royals after travelling to Stockton on Tees on Sunday 14 June for the fourth British Dragon Boat Association (BDA) event of the year.

The day started with the Royals out in heat one against the top Premier team (Amathus) and standard league local team (St Neots DBT) for the 200metre races.

We burst of the line and kept up with Amathus to finish second in a brilliant time and just three seconds behind them.   Being first out meant along wait before finding that we were the fastest heat runner up and into the cup semi finals.

The draw meant that we were up against Amathus again, we dug deeper and despite finishing behind them in second place again we managed to shave a second off the gap, to finish this time only two seconds behind them.  Even better news followed and yet again we were the fastest runner up and this meant a place in the minor final.

We went on to beat two other premier teams to finish in fourth place overall, but more importantly the top standard league team and maximum points.

The afternoon went just as well in the 500metre racing, but this time our first heat was against Kingston Royals, our rivals for the top spot in the standard league.  We went out strong, it was a close race with both teams wanting that first place - but we dug deep to finish just half a second in front of them and yet again a place in the cup semi finals in a draw against, would you believe it  - Amathus!

We went out strong and we came home in second place to Amathus - but in trying to keep up with them we managed to shave six seconds off our heat time and a place in the minor finals yet again.

The 500m minor final was a close race and three teams battled it out down the course to end with a photo finish.  Nerves and tension went around our camp whilst we waited - but then the announcement came that we had won it by 0.3 of a second - with just 0.7 of a second between all three teams, but this meant for the Royals, a fourth place overall again, top standard league team and maximum points.

Team Manager Paul Saywell said: "I was so pleased with everyone today for making the long trip up north. A special big thank you has to go to our three reserves for this event, Samantha Wallis, Luke Alexander and Toby Lydon, you are a special inclusion.  A big thank you also has to go to paddler Richard Matthews, who travelled up to Stockton after literally just landing back home from his holidays early on Sunday morning.

Paul added: "That's what makes the difference with the Royals, not many clubs have this sort of commitment, a huge well done to everyone".

The Royals will next be in action at a BDA event on Saturday 4 July at Caldecotte Lake, Lakeside Grove, Bletcham Way, Milton Keynes.  So if you fancy seeing what happens on a race day - why not pop over and check us out.

Or perhaps you would like to be part of the action and have a go, then email us at: info@cambridgeshireroyals.co.uk for more information.