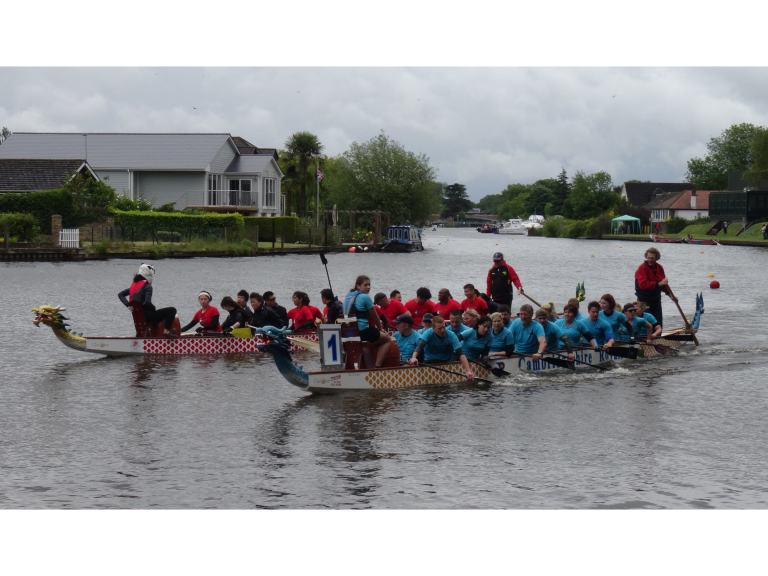 The Cambridgeshire Royals battled against close racing, dead heats and a near miss on a bend at a new venue on the BDA race calendar - Wraysbury on Sunday 31 May 2015.

The day started with the 200m racing, the first race is always the most important, this sets you up for the rest of the day's racing seeding, and today was no different.

The day started with a time trial which put is in 7th overall (there were 22 teams in total taking part today), and into Heat 1 against the Thames.  We put up a fight against Thames, but they beat us to the line by just .05 of a second, but our time was enough to take us into the Cup races as 7th fastest team.

For those who don't know races are divided into Cup and Plate events, today the top 12 teams went through to the Cup races with the remaining 10 teams going through to the Plate competition.

We lined up for Heat 2 against the Windy Panda's, and fought it out down the course.  The result - a dead heat - not even a video or photo finish could decide the winner and both teams were given a time of 53.91.  Unfortunately, for the Royals, a quick count back on the times of the previous race meant that the Windy Panda's took the placing from us and we missed out by one place for the Cup Semi Finals.  We eventually finished 9th overall in the Cup races, but more importantly for us 4th overall in the standard league, and picking up some good points.

By the time we got to the 5k race, the sun had popped out and our mood was high.  The 5k race gets underway and we are the 14th team to go out (placings are worked out on overall positions from the 200m in reverse order).  We went off strong, and all was going well until we hit the turn!  The team in front of us misjudged the turn and ended up across the front of us, which meant we had to stop, manoeuvre around them and then restart.  This cost us valuable time, and we lost our momentum, but we battled hard, got it back and raced down to the finish in 15th overall place.

Justin Evans summed up the day by saying:  Today at Wraysbury for me was a massive mix of emotions. I went from the usual nerves followed by frustration and confusion, to finish off with total pride towards a team that will always pull together and give 110% whenever asked.  No trophies today but I think we have learnt so much that we can use to make our team stronger and stronger.