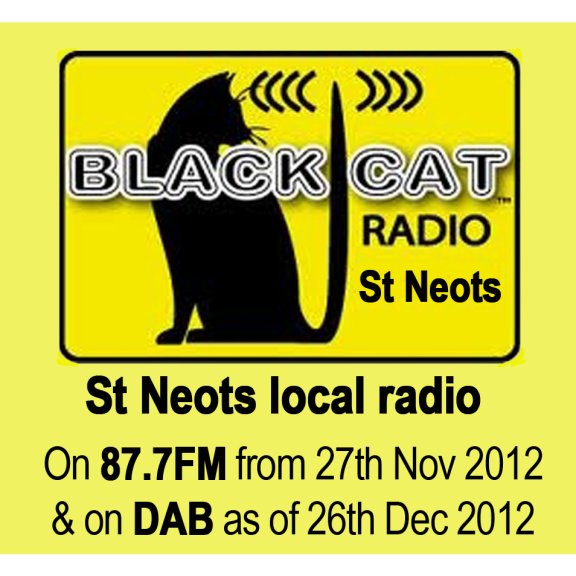 SPECIAL RADIO ADVERTISING DEAL - WHY NOT GIVE IT A TRY!

Book an advert for this broadcast the cost is £149 for the month and if you book now you can have a further 3 months on DAB at £99 / month.

BLACK CAT RADIO GETS FM LICENSE FOR ANOTHER MONTH from Nov 27th.. in Cambridgeshire's largest and fastest growing town.

Black Cat Radio, a group formed by the BBC broadcaster Tony Gilham and local backers, is back on the FM frequency from Nov 27th for another 30 days. "The aim of Black Cat Radio is uniquely to provide a full service for St Neots and nearby parts of Cambridgeshire and Bedfordshire" according to its founder.  Gilham, who has had a thirty year plus broadcasting career in commercial radio and the BBC currently produces  "Gilham Gold" for several BBC stations including Radio Cambridgeshire, has recruited a new production team for Black Cat "There's an amazing amount of enthusiasm to get involved. We have a cross section of people from students to the arts " he says.

Mark Hansard, Black Cat's Finance Director says: " Given the state of the economy we are positively amazed at the adverting and sponsorship support we have been getting from local businesses."

The station's format according to Tony Gilham will include  local information, and short interviews with a wide range of St Neots  residents: "It could be everyone from sports clubs to musicians through to the people who make the St Neots area tick."

The music programming is based around adult hits. "This could be anything and everything from Adele, and Florence and the Machine to Coldplay and the Beatles.. Like our listeners we're not constrained by the narrow rules imposed by the London based managers of other "local" stations in the area" according to Graham Hughes, a former BBC producer, who has helped formulate Black Cat's music policy..

Black Cat Radio will broadcast as an Ofcom regulated Restrictive Service Licence  However it is hoped the station will get a full time  frequency  within the next eighteen months as Ofcom issue new local licences.