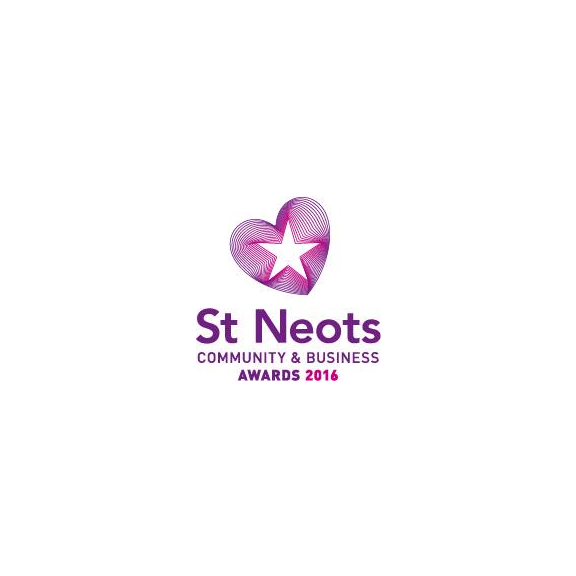 Over 100 guests attended the gala dinner ceremony at The Priory Centre on Saturday 8th October, hosted by Ernie Almond from Black Cat Radio and Alissa King-Underwood, the current Miss Cambridgeshire.  The winners of eight categories were announced on the night.

Person of the Year, sponsored by Giggs and Co, was awarded to Ross Williams-Gick, Community Champion at Tesco St Neots. Ross was recognised for his community and charity focussed commitments across the town. Nominators particularly mentioned the summer 2016 Family Fun Day that Ross developed - attended by thousands and raising nearly £6000 for the charities and community groups that attended. Robert Usher, Lawn in Order gardening maintenance services was also Highly Commended in this category for his recent act of generosity for an elderly couple who were deceived out of some money for gardening services. Robert offered to provide the services free of charge and gave the couple back their faith in human nature.

Young Person of the Year, sponsored by Rexroth Bosch Group was awarded to Joseph Sydes - an inspiring young man who was last year diagnosed with cancer and fought against all the odds to recover. Despite undergoing intensive chemotherapy and being very ill he continued his school work in hospital and achieved very successful end of year results. His positive attitude and determination to succeed has been key to overcoming the ‘Big C’.Sean Best was also highly commended in this category for his care and bravery as a young carer for his little sister Mya-Louise, who sadly passed away earlier this year.  Matt Giggs, owner and Managing Director of Giggs and Co was so inspired by Sean’s story he heard on the night, he pledged a donation of £1000 to help Sean start Mya’s Trust – the charity that the 13 year old wants to set up in memory of his sister.

Charity / Community Group of the year, sponsored by The Co-operative funeralcare, Central England Co-operative was awarded to Switch Now CIC – a new initiative that works with young adults with learning difficulties / disabilities; providing supported training and work experiences to develop employability skills, with the objective to be ‘work ready’. A key project is a community café staffed by the young adults who benefit from this group. The group works tirelessly to provide a cheerful and friendly environment, helping to break down the stigma associated with disabled people.  The team behind the St Neots Fire Engine Pull, Dave Webster and Steve Wills, were also Highly Commended in this category. The annual event is well known across the town and has already raised in excess of £140,000; funding camps for Young Burns Survivors up to the age of 19.

Teacher of the Year, sponsored by Rexroth Bosch Group was awarded to Reg Searle, Musical Director of St Neots Orchestra and Choral Society. Starting the society over 35 years ago, Reg was acknowledged for his ongoing commitment both in time and passion; giving enormous amounts of time to choosing and planning the programmes, rehearsing with the groups weekly and continually encouraging young talent.

Business of the Year, jointly sponsored by Beacon Wealth Management and Jeffrey Mills Solicitors was awarded to Peppercorns Academy in recognition of their long established community focussed tuition. A family business, and founded in the early 1980’s, the team was specifically put forward for their caring approach and the excellent example they set as role models for their students.  The business was also recognised and thanked for their ongoing contribution to performing at local community initiatives. Katy North Academy of Dance & Cheer was also highly commended in this category – having been nominated in light of their local charity support and the provision of lessons for anyone aged four and up, regardless of ability and disability. The academy was also recognised in light of their recent launch of the first local wheelchair dance class for both children and adults.

Employer of the Year, sponsored by Huntingdonshire Regional College was awarded to the local Chartered Surveying and Planning practice Barfords + Co. With a 40 year history, Barfords + Co continue to demonstrate an exemplary commitment to the professional and personal development of their employees - investing in staff to achieve professional qualifications as well as supporting employees in college courses through distance learning.

Sports Team / Club of the Year, sponsored by Goldstraw Goldsmiths was awarded to New Saints Boxing Club.  The not for profit family run business has not even been established for a year – but the family behind it have worked tirelessly to get the club off the ground in their spare time. The club has gone from strength to strength in just over a year, encouraging children and adults of all ages and abilities to take up their sport. Working in partnership with Cambridgeshire Police they have also set a class dedicated to young people who have been involved with anti-social behaviour.  The St Neots Dragon Boat Team were also highly commended in this category in recognition of the impact this team have had over the past 12 months – with group members representing Team GB in the European Championships, the club hosting league events as well as co-organising the St Neots Charity Dragon Boat festival; providing training to all crews who took part in the event.

Sports Person of the Year category (individual or coach), sponsored by Barretts of St Neots was awarded to Scott Thomas. Despite a difficult medical history, Scott was driven to achieve sporting success – initially as a swimmer and a runner and now as an elite triathlete. Alongside this he coaches younger swimmers, inspiring them to reach the best of their ability. Whilst training for triathlons and running his swimming teaching sessions, Scott also achieved six As and an A* in his GCSEs. Kevin Bullus from New Saints Boxing Club was also highly commended in this category in recognition of his complete dedication to coach children and adults in six of his seven evenings each week.

Over 100 nominations were received for the 2016 St Neots Awards, reiterating the number of individuals, community groups and businesses that have made a clear impact in the town. Speaking about the awards programme and the evening event, St Neots Town Mayor Cllr Derek Giles said: “I was both delighted and humbled to recognise such a worthy group of award winners and finalists in our 2016 award ceremony.  St Neots residents and local businesses really do achieve fantastic things - and this year’s awards gave us the chance to say thank you and well done.”