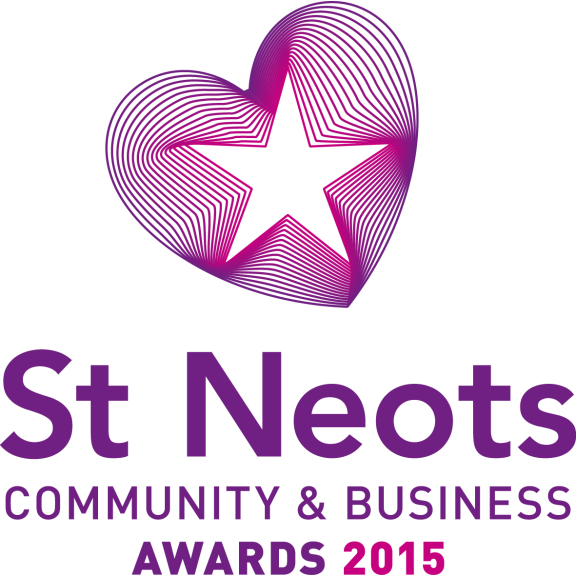 The winners of the first annual St Neots Community & Business Awards were announced on Saturday 25th April.  The new awards programme, presented by St Neots Town Council, was developed this year to recognise the achievements of individuals, community groups and businesses within the town.

The winners of twelve categories were announced on the night.

Person of the Year, sponsored by Giggs and Co, was awarded to Darren Barker from Eaton Socon. Darren is a Funeral Director at the St Neots branch of Co-operative Funerals and was recognised for his outstanding contribution to local charity fundraising.  Over the last six years, as the organiser of the ‘Star for a Star’ campaign at Christmas, Darren has raised over £12,000 for local charities and is continually giving his support and time to other charitable causes too, alongside his full time role.

Young Person of the Year, sponsored by Bosch Rexroth, was awarded to 11 year old Lucy Wood from Little Paxton.  Lucy is a footballing star with an amazing future ahead of her – despite suffering a severe kidney illness before achieving success.  With only 27% functioning kidney capacity, Lucy has shown true grit, determination and complete passion to become a talented young player, in a sport that has often seen her being the only girl on the pitch.

Teacher of the Year, sponsored by Bosch Rexroth, was awarded to Michael Donnelly, a longstanding teacher, Head of Geography and Deputy Head of Sixth Form at Longsands Academy in St Neots.  Michael has been at the school since 1978 and was nominated by the school in recognition of his selfless and tireless work and the impact he has had on thousands of local students throughout his career.

Community Award, sponsored by bpha, was awarded to Little Lambs, at St Mary’s Church in Eaton Socon.  Little Lambs is a not for profit organisation helping local families in need by providing essential baby equipment and it has been hugely helpful for families who would otherwise be struggling.  It is coordinated by a small team, with little support from local childcare services, and has made a real difference to people who need the support.

Unsung Hero Award, sponsored by Barretts, was awarded to Marcus Pickering for his role in the Love’s Farm Community Association.  Marcus has been Chair of the community group since October 2013 and has made a massive impact, despite the fact that his role is often overlooked. Marcus’ approach has enabled the community association to become more efficient, proactive and accountable. He is hardworking and diligent in this voluntary position, yet often takes on other responsibilities too if no one else steps forward – demonstrating his unwavering commitment to the local community.  Tracey Mowatt from Vir2oso was also highly commended in the Unsung Hero category for her work in establishing a new and growing community art group in the town.

Charity of the Year, sponsored by Lilac James, was awarded to St Neots Timebank.  St Neots Timebank was established to enable local people to share their knowledge and skills with their community and be rewarded for it – with time. The charity celebrated its third anniversary earlier this year and now has over 100 volunteers who actively donate their time within the St Neots area.  Mind in Cambridgeshire was also highly commended in this category, in recognition of the valuable role it plays in providing mental health services in the St Neots community.

Sports Individual of the Year, sponsored by Realfit was awarded to 18 year old Tom Stead from Staploe, St Neots.As a young talented triathlete, Tom competes in events across the country and the world and is also a member of the St Neots Triathlon Club, NiceTri.  Despite competing at age group level for Great Britain on the European and World stage for just two years, Tom is already a multiple Works and European champion. Even more impressively, Tim couldn’t even swim a few years ago, but thanks to an encouraging PE teacher who suggested he compete in a local Aquathlon, Tom learned to swim by watching YouTube videos and went on to win his first ever swimming race.

Sports Team/Club of the Year, sponsored by Huntingdonshire Regional College was awarded to NiceTri Triathlon Club.  This St Neots based club started five years ago, to offer a supportive environment for those who wished to train for and compete in triathlons.  As well as providing a professional training environment, the approach the club takes is very welcoming and encouraging to people of all levels; growing into a fun, supportive community of people who enjoy training together, whatever their level.   The club also operates NiceTri Events across the region; with its showcase event, the Grafman Triathlon being successfully chosen as the host of the 2014 & 2015 Triathlon England Middle Distance Championships.

Fantazee Dance Productions in St Neots was also highly commended in the Sports Team/Club of the Year category, with an acknowledgement for the huge number of nominations received for the dance academy from students and parents; demonstrating the support for and value of its work.

Sports Coach of the Year was awarded to Linda Ashley-Davidson, founder of Swans Swimming Club in St Neots. Starting in 1987 as one hour a week training session, under Linda’s guidance Swans has grown to provide swimming lessons, squad swimming and rookie lifeguard training, taking place seven days a week across various pools in the local area.  Linda manages to drive challenging training sessions where development is key, yet maintains a level of fun where no one is pressured to perform.  The number of testimonials received from her students clearly demonstrates the impact that Linda has made and the respect her students hold; with swimmers winning galas and medals at County Championships, swimming the English Channel and completing for Great Britain Triathlon thanks to Linda’s coaching.

Business of the Year, sponsored by Beacon Wealth Management was awarded to The Shop at Forty in Eynesbury.  This family run business only opened last year but has already carved a niche out for itself in the local area; combining upcycled furniture, creative workshops and a coffee shop too. It has built up a large local following in a short time and has created a unique atmosphere which runs throughout the shop, in the regular workshops and across its engaging social media activity too.

Employer of the Year, sponsored by Vital Sign Design and The Best of St Neots was awarded to local department store Barretts of St Neots.  Originally a tiny corner shop established in 1888, Barretts of St Neots has now become one of the area's largest independent department stores. Barretts recognise that its employees are fundamental to the success of the business and it is proud to employ a large number of local St Neots residents - many of whom are long standing members of the staff team.

Customer Service Award, sponsored by Adlams Solicitors, was awarded to the team at Pets Corner, St Neots.  Pets Corner is a family run business which prides itself on knowledgeable, friendly staff, quality products that last, and exceptional animal welfare. The team at the St Neots store were recognised specifically for their ongoing customer loyalty and to highlight the popularity of its Puppy Hour, in which customers come into store with their puppies, to obtain support and to meet other owners.  The event is well run by friendly and approachable staff and provides a supportive environment to local puppy owners.

Over 100 nominations were received for the 2015 St Neots Awards, reiterating the number of individuals, community groups and businesses that have made a clear impact in the town.  News of the 2016 St Neots Awards will follow later this year.