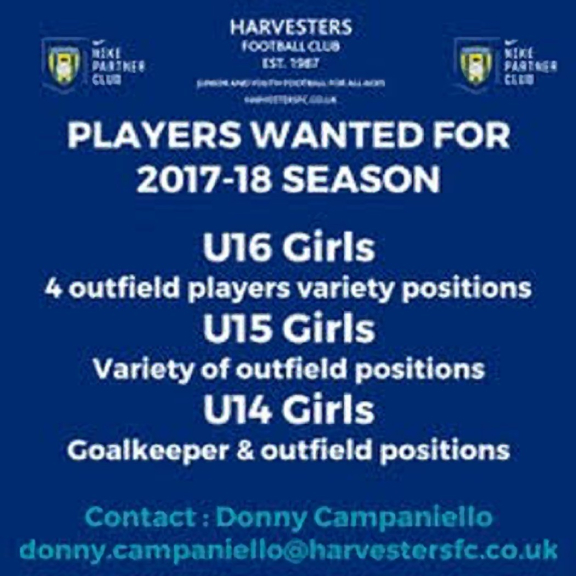 With almost three million active female players, football is the biggest women’s team sport in England – but there is plenty of room for more people to get involved.
Following England's Lionesses 3rd place finish in the 2015 World Cup Finals and recent qualification for European Championships this summer, the female game is going from strength to strength, and is finally receiving the publicity it deserves.
Harvesters Football Club, a friendly grassroots club, based in Smallford near St Albans are looking players for their girls teams across a number of age groups for the 2017/18 season. Teams play in the Herts Girls Football Partnership League at all ages from U10 to U18 and train during the evening on Harvesters own 3G all weather pitch. The club also runs a Vixens group for girls aged 6 to 9 who have never played football.
Founded in 1987, Harvesters FC is an FA Charter Standard Football Club and Nike Partner Club with youth teams from under 7s to under 18s for girls, boys & inclusives, as well as a walking football team.
For more information please contact: Donny Campaniello, donny.campaniello@harvestersfc.co.uk or visit the Players Wanted page http://www.harvestersfc.co.uk/a/teams-looking-for-new-players-47190.html on the Harvesters FC Website.

As the owner of thebestof St Albans and Harpenden my mission is to help local independently owned businesses to grow and community groups, charities, local sports clubs, societies to thrive. If you know...