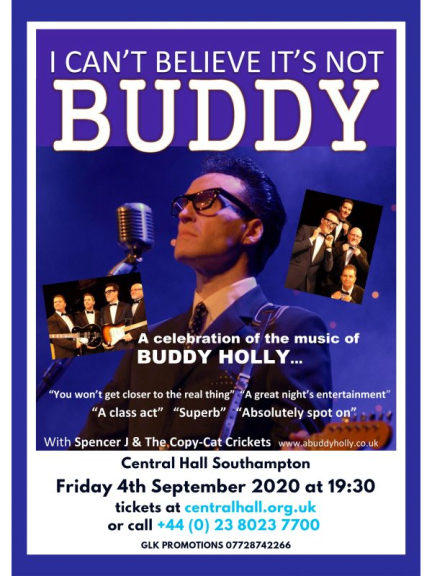 BUDDY HOLLY & THE CRICKETS ARE BROUGHT BACK TO LIFE, AS THEY LOOKED AND SOUNDED IN 1958 WHEN THEY FIRST TOURED THE UK PERFORMED BY TALENTED MUSICIANS SPENCER J, JJ KING, GERRY SLATTERY AND SPENCER LINGWOOD

Not a stage play, Spencer J & the Copy-Cat Crickets create the feel of a Rock ‘n’ Roll concert, straight from the fifties.

The band will take you back to the age of the soda shop, the drive through diner and the record hop. Back to when a young Texan first played his heart out to screaming crowds in theatres and concert halls across Great Britain.

Years of research and rehearsal have gone into perfecting this show. The results speak for themselves. At every performance, audiences clap, cheer and sing along. They dance, yell for encores and ask for photographs. And at the end of every show, the question is always “When are you coming back?”

Song choices are based on actual set lists from Buddy Holly’s late-fifties performances. Besides legendary hits like ‘Peggy Sue’, ‘That’ll Be The Day’, ‘Oh Boy’ and ‘Heartbeat’, dozens of other gems from his catalogue of over 100 recordings are also featured, as well as hits by the other Kings of Rock ‘n’ Roll, all of which Buddy actually performed at live shows (‘La Bamba’, ‘Blue Suede Shoes’, ‘Rip It Up’, ‘Shake Rattle & Roll’.)

In terms of energy, originality and ability to connect with an audience, Buddy, Jerry, Niki & Joe B, the original Crickets, had few equals, beyond Elvis. Through hard work, impeccable musicianship and dedication to authenticity, Spencer, JJ, Gerry and Spencer succeed in re-creating The Crickets’ special brand of “feel-good fifties fun” at venue after venue. And whenever they are on stage, fans everywhere agree that, once again, Buddy Holly lives!