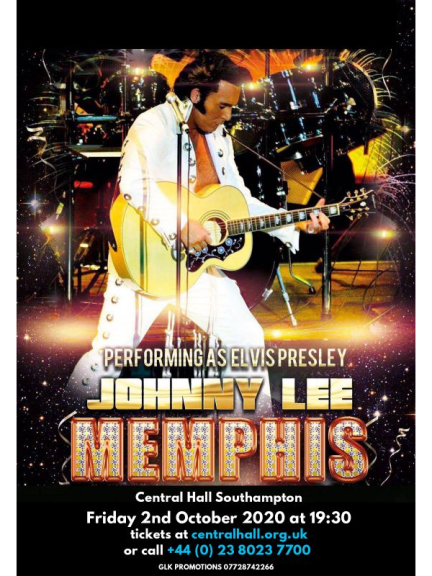 This show is a 2-hour spectacular tribute to Elvis during the concert years from 1969 to 1977. Showcasing the most exquisite authentic costumes. One of which was made by the same pair of hands that made Elvis’s jumpsuits. Johnny has performed his tribute to Elvis in countries such as China, Canada, USA, Norway, Australia, Italy, Spain, Cyprus, Sweden and various other European countries.

In 2012 Johnny was invited to sing for the Queen as part of Her Majesty’s Jubilee celebrations in George Square Glasgow. In 2010 Johnny won the Elvis World Cup title, he won The European professional championship title in 2014 and the Penticton BC Ultimate Elvis competition 2015.

“I have known Johnny Lee Memphis for a few years, and he is one of my favourite Elvis Tribute Artists, he shows total respect for Elvis and his music, his performance is at the top of the Tribute World, his personality is such that you think you have met your new best friend just as
Elvis would have treated someone. If you have the opportunity to see Johnny perform, don’t miss it, he is doing Elvis proud” – Charles Stone, Elvis Presley’s Tour Manager and close friend.