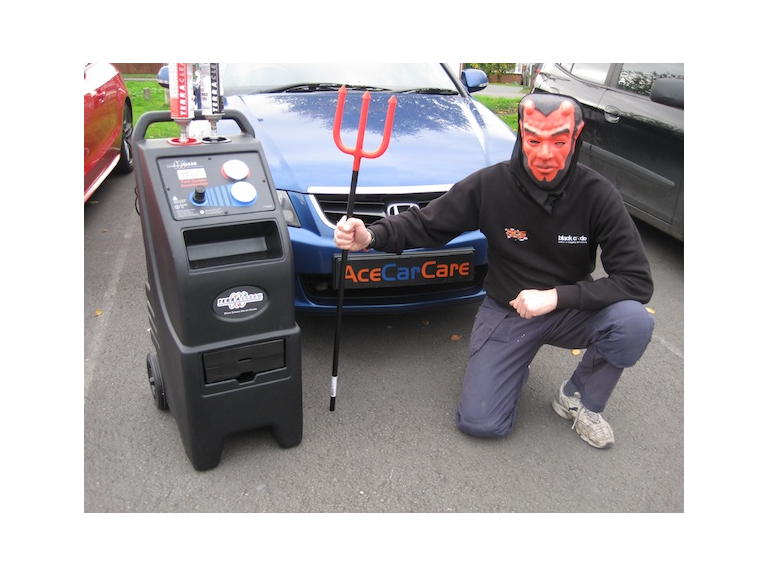 A ‘terra-fying’ new technology to remove carbon from engines and exhausts has arrived at a Shropshire car care centre in time for Halloween.

Terraclean, a Canadian product only recently arrived in the UK, ‘burns off’ the clogging carbon deposits left behind by all combustion engines, leading to lower running costs and emissions.

Stuart Williams, from of Ace Car Care in Harlescott Lane, Shrewsbury, introduced the system alongside his other tuning and maintenance services this month (October 2013) and said the result was a more fuel efficient car with better performance and lower emissions.

“You’ll be genuinely ‘shocked’ at how much better your fuel consumption will be,” he said.

“Over time, carbon coats the inside of your engine and exhaust system, ultimately making it less efficient and more polluting. But there is no need to be ‘scared’ with Terraclean.

“On petrol engine vehicles the Terraclean system uses a vapourised, highly refined version of petroleum and negatively charged molecules to burn off the carbon from your whole engine and exhaust system, right to the very ends.

“It can be used on virtually every combustion engine, both diesel and petrol, and every type of vehicle, including cars, vans and even the largest heavy goods vehicles.

“The results effectively restore your car to the carbon-free state it originally left the factory in as far as emissions and fuel economy go and improves overall performance.”

It has been endorsed by motoring specialist and television personality Edd(CORR) China, from the Discovery Channel’s ‘Wheeler Dealers’ programme, in which old and tired cars are bought, overhauled and then sold on for a profit.

“In one episode, Edd had an old Jaguar brought to his garage and the emissions from it were so bad that it would have failed an MOT,” said Mr Williams.

“Having heard about the Terraclean system, which had only just arrived in the UK in 2012, and with no other other real options, he gave it a go and was so impressed by the results that he now professionally endorses the product and offers the system in his own workshops.

“By introducing Terraclean, which costs just over £100 for engines up to two litres in size, as part of an annual service, you will keep your car running efficiently and also be helping the environment.

For more information about the Terraclean product, visit the company’s website at www.acecarcare.co.uk or www.terracleanshrewsbury.co.uk or call 01743 466100.