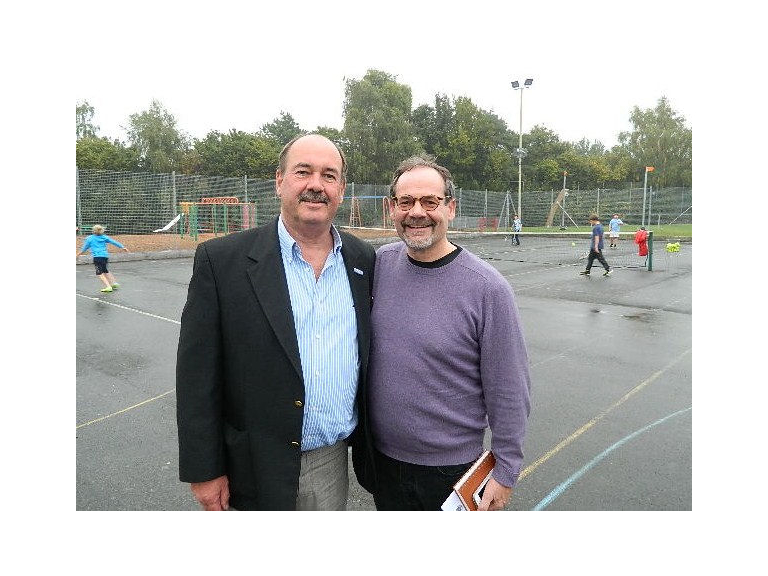 Michael Downey, the man shaping the future of British tennis, returned to his London office from Shropshire greatly impressed at the health of the sport within the county.

The chief executive of the LTA enjoyed a busy day as a guest of Chris Hinks, the chairman of Tennis Shropshire, who made the most of the opportunity to showcase the many exciting developments happening in the county.

The series of engagements included a visit to the Aegon GB Pro-Series tournament at The Shrewsbury Club.

He met wheelchair tennis players in Telford while the itinerary also took in a visit to the Monkmoor Recreation Ground to see the fruits of a partnership to successfully re-establish a tennis programme between Tennis Shropshire and Shrewsbury Town Council.

Mr Downey said: "Chris had me basically on the go from 9am throughout the day, going to meeting after meeting, but he did the right thing as he took advantage of me being in the county.

"He doesn't know when I'm going to come back so he arranged for me to meet with wheelchair players, his volunteer committee, the management of The Shrewsbury Club, the Mayor of Shrewsbury, and the day ended at a sporting dinner so it was great.

"This is what I should be doing when I get out into the market place."

Mr Downey, previously in charge of Tennis Canada, spends much of his time at the National Tennis Centre at Roehampton in South West London so was pleased to see how tennis is being run in different parts of the country.

"I'm from Canada so I'm getting to see this great country through the eyes and lens of tennis and that is so unique," he added.

"I've got a map in my kitchen at home where I mark off the places I've been to and I think this is the 28th county I've been able to go to in my first nine months.

"This is the real world so while we believe we are doing a lot of good things at the head office at Roehampton with the LTA it's really getting out and seeing tennis, watching volunteers and people getting behind the sport.

"We've got great people here in this county and I've really been quite enamoured with the great work that's being done that I've got to see first hand."

Mr Hinks, delighted to welcome the chief exectutive of the LTA to Shropshire, said: "It was great to be able to tell Michael about everything we do at Tennis Shropshire and what we are doing to get more people playing tennis more often.

"It's been a busy year for tennis in the county, a great year, and there's lots and lots of change going on within the structure of tennis. It's been a phenomenal year and we're very positive going forward.

"We've got the right people coming forward to help us do that and we've got the structures in place that next year we should really be starting to reap some of the fruits of our labour."