The Shropshire Wheelchair Tennis Group scooped a hat-trick of top national awards at a prestigious end of year presentation ceremony in Gloucester - with Scott Smith leading the way.

The group's annual tournament, The Shrewsbury Open, held each summer at The Shrewsbury Club and supported by the Tennis Foundation and Tennis Shropshire, was named as the Wheelchair Tennis Development Series tournament of the year for the third time in four years.

Events take place across the UK, in a number of towns and cities in England, as well as Belfast and in Scotland, with the Shrewsbury tournament, which attracted a record entry of 40 players in 2016, once more selected as the best on the circuit. 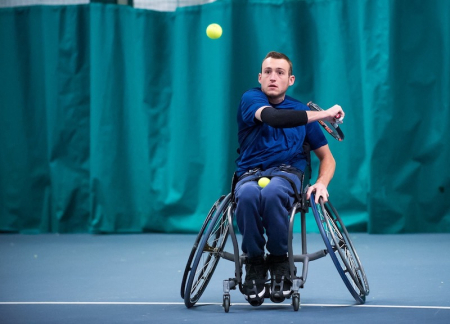 Pictured: Scott Smith was delighted to collect three leading national awards - two individual and one on behalf of the Shropshire Wheelchair Tennis Group - in Gloucester.

Scott, who plays a key role in helping to organise the tournament, also collected two leading individual awards in Gloucester.

He was presented with the special recognition award and also claimed the trophy as winner of the male singles title for winning most events on the National Series tour during the year.

He received the special recognition award for helping to run The Shrewsbury Open, his general contribution to the Shropshire Wheelchair Tennis group and also for his role in setting up a new group in Birmingham.

Scott said: "Winning the award for the tournament of the year again is great for the club members and we are very proud of the tournament we hold each year at The Shrewsbury Club. We always receive great feedback from the players. There were some very good tournaments staged this year with a record numbers of entries for the Tennis Foundation.

"This is an award voted for by all the players, so that makes it all the more special."

Scott, 28, added: "It was nice to enjoy some success over the year in winning the male singles titles. The highlight had to be finally winning my home tournament in Shrewsbury after several attempts.

"I have personally benefited from playing wheelchair sport from an early age, so hopefully through being involved it gets more people playing sport and they can also reap the benefits too."

Scott is currently seventh in the British men's wheelchair tennis rankings, which are topped by reigning Wimbledon champion Gordon Reid.