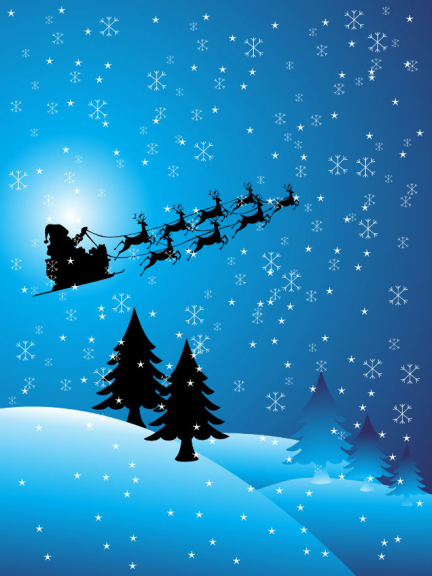 Twas the night before Christmas, in an old house by the bridge somewhere near the town of Rochdale. The night sky shone with moonlight and the twinkling of a thousand sparks posed as stars. The howling of a lone wolf echoed in the emptiness and soon thereafter the crickets began to churp. Rushing of the water speeded up as the winds began to race , all was calm save a little girl that nervously paced the small confines of her bedroom. In the house beside the bridge.

The little girl wore a dress of soft pink and walked back and forth, clutching a threadbare bunny close to her chest. I'll stay up all night and I will see him she thought as she stopped to look out of the tiny window.

Night was drawing darker and the witching hour was upon them. The girl, determined still, sat on the floor, on a circular rug, reading A Christmas Carol. Slow, heavy footseps interrupted her merry reading. Her head jerked up in alarm as a bulky item thudded to the floor downstairs. Cautiously, she rose to her feet and tiptoed towards her bedroom door. Maybe he was here.

Her door creaked open and her small head protruded from the crack, casting a line of light and a circular shadow on the landing. Someone was definitely down there, she creeped along the wall and delicately descended the rickety staircase.

The moon lighted her way around the house through the windows. She stopped at the door to the lounge. A large man was hunched over near the Christmas tree. It's him! She thought in delight.

Thunder clapped outside and the girl let out a frightened yelp. The man turned with unlikely speed and spotted her vague silhouette in the shadowy darkness of the tight room, in the small house, by the bridge, near the town of Rochdale.

The smile he smiled when he saw the girl told her this was not the man she awaited. She made to run, but had barely begun when the man reached out and grabbed her.

Her tale went around but briefly, she was never found and her mother spent the Christmas alone. In the old house, by the bridge, somewhere near the town of Rochdale.