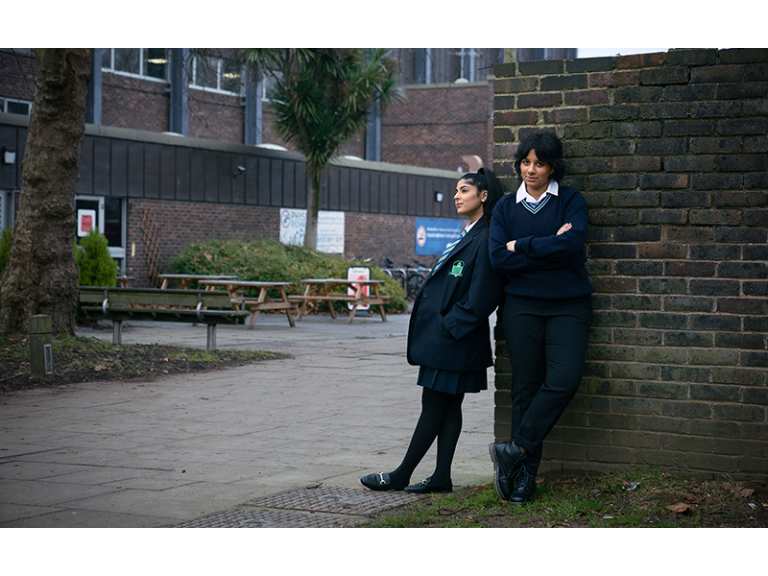 Seventeen-year-old Asha is an empathetic rebel, inspired by historical revolutionaries and iconoclasts Sylvia Pankhurst and B R Ambedkar. She’s unafraid of pointing out the hypocrisy around her but less sure how to actually dismantle it. Meanwhile, her younger sister, Bettina, wide-eyed and naïve, is just trying to get through the school day without getting her pocket money nicked. When Bettina turns to her for help, Asha starts to ask what standing up for her political beliefs really looks like. The return of this exhilarating production following its acclaimed world premiere at the OT in 2022.

★★★★ “Confidently drawn two-hander that probes injustices, both domestic and colossal” The Stage

Bouncing with wit, Sonali Bhattacharyya’s upbeat play is a coming-of-age story about the unfairness of growing up in a world where you don’t make the rules. Sonali Bhattacharyya was 2018 Channel 4 writer in residence at the OT, where she wrote Chasing Hares, winning the Sonia Friedman Production Award and Theatre Uncut Political Playwriting Award, produced at the Young Vic in 2022.

Directed by Nimmo Ismail, whose work includes Glee & Me by Stuart Slade and The Christmas Star by Russell T Davies (both Royal Exchange Manchester), Fragments by Cordelia Lynn and My England by Somalia Seaton (both at Young Vic), and SNAP by Danusia Samal (The Old Vic).

All performances are at full capacity unless otherwise stated. We ask you to please consider wearing a mask when joining us for a performance, to protect the actors and reduce risk of cancellations, however it is not a requirement of entry. Find out more about COVID-19 Safety.