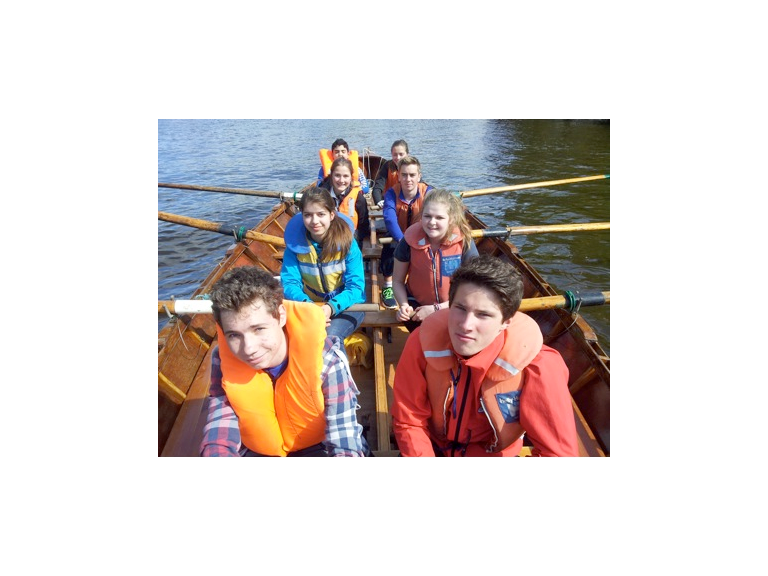 There is a new type of boat on the Thames, designed and built by the local boat-builder Mark Edwards MBE, who also designed and built the Queen's Royal Barge Gloriana. It is called the Skerry, a combination of two traditional Thames craft – the skiff and the wherry. It has been designed by Mark to be fast in a race but also comfortable and safe for people entirely new to rowing. My involvement with it is that the first two skerries were commissioned from Mark by me and a group of friends, for picnics and for the Great River Race. In using it, we discovered what a brilliant boat it is.

It can be rowed by anyone from the age of eleven upwards and is particularly suitable for youngsters at school because they sit two to a thwart, making their first experience of rowing less alarming and more sociable. A group of school children from the German School in Petersham, all new to rowing, became extremely enthusiastic this past summer, with many training sessions, and entered for the Great River Race (21 miles from the Isle of Dogs to Ham) in a Skerry. They were the fastest on the day and won the Skerries Cup, defeating five other Skerries, all rowed by adults.

The success of the German school suggested that skerries should be made available for other schools. A plan has therefore emerged to form a charitable organization, called Skerries for Schools or S4S, that will aim to provide the experience of rowing to pupils of as many schools with access a river.

Early signs are that Richmond upon Thames schools are very interested in taking part, and we plan to assess the level of interest this summer with the help of these secondary schools. Two Skerries will be available at all times at Mark Edwards' pontoon beside Richmond bridge and the schools will be able to book an unlimited number of three-hour sessions in one or both boats (two is more fun, making a race possible). Outings will be free and accompanied by a qualified coach.

If there is sufficient response, our plan will be to have a schools regatta in late summer. The winning school will be able to enter a team in a Skerry for the 2014 Great River Race.

If Richmond proves that the scheme can work, the intention will be to extend it to other London boroughs along the Thames – and eventually perhaps even to schools near rivers elsewhere in the country.