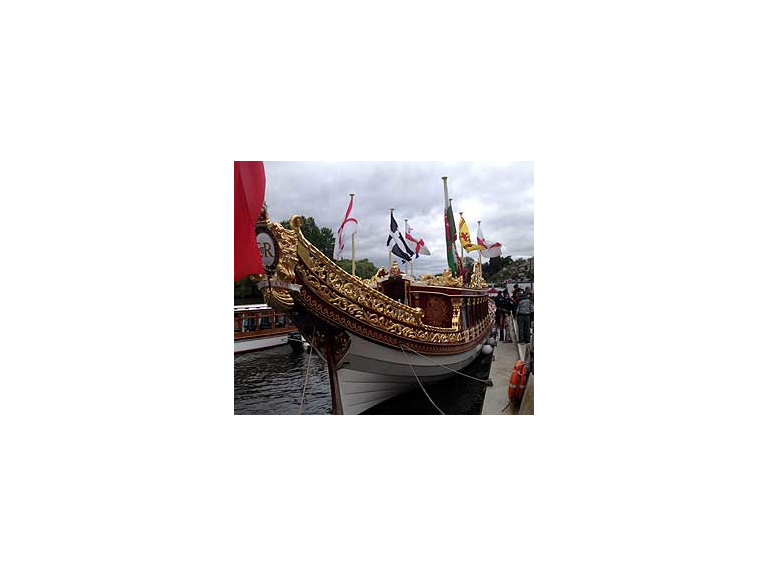 The Gloriana will not be housed in Richmond upon Thames. Richmond Council has withdrawn the Heritage Lottery Fund application and no planning application will be presented.

Commenting on the announcement, Cllr Pamela Fleming, Cabinet Member for the Environment, said:

“It is a pity that this beautiful craft, which was conceived on our river, will not find a home here. She could have been a great asset to future generations in Twickenham and the whole Borough.”

“Gloriana deserves to – and I am sure will – find a home where she is welcome and can be cherished for what she is, a working vessel serving charitable causes, a triumph of Borough craftsmanship, a future part of our national heritage and a tangible monument in centuries to come to the Diamond Jubilee of a great Queen. We wish her well.

“Given that our own master boat builder, Mark Edwards, created her, it was natural to explore the possibility of a home here in the Borough

“Many local people did support the idea of Gloriana’s coming to the Borough, but, sadly, in hosting such a unique and specialised craft, a number of technical issues arise, which limit the number of practical sites and require compromise. The Council has no current plans to conduct any further studies.”

The Queen’s Royal Row Barge, Gloriana, could be housed permanently in Richmond upon Thames, subject to planning permission.

Foster and Partners, have prepared a potential design for a modern boathouse and enhanced new café and play area for local people and visitors at the historic boathouse at Orleans Park.

The current consultation will be used to shape the proposals and inform decisions about whether the boathouse at Orleans Park and Riverside could be redeveloped to provide a safe and secure home for the vessel.

Gloriana was built to mark the Queen’s Diamond Jubilee celebrations and was the first Royal row barge constructed in over 200 years. She was commissioned by Lord Sterling and built by local Master Boat Builder Mark Edwards and his team in 2012, just in time to be the lead craft at the Diamond Jubilee Paegant.

Her Majesty asked that Gloriana will be used to advertise better use of the Thames and that Gloriana will be maintained by Lord Sterling and the Maritime Heritage Trust. This is now happening, thanks to Royal supported charities and other future events that will celebrate the Thames. Young people in particular are being encouraged to get involved.

It was felt that it was important Gloriana had a safe and secure place to act as a permanent base, that had access to the water and was suitable for people to view the barge in all her glory and learn about her past, as well as learning about how barges were constructed in days gone by.

Several sites were considered to house her but Twickenham’s Orleans Park was chosen as the final site. The historic boat house was declared the most suitable, both operationally and historically.

Architectural company Foster and Partners have drawn up a possible design for the boat house, which is sympathetic to the needs of the boat, as well as allowing the public to see and access the barge.

Work will start on the new visitor’s centre, café and play area in autumn 2015, subject to planning permission and funding. Residents and Thames users can give their opinion on the plans throughout July.

The leader of Richmond Council, Lord True, said he was delighted that Richmond and Twickenham had been chosen to host Gloriana. They are the only London borough adjacent to the Thames, and have years of Royal connections, so are well best to be the home of Gloriana.

Lord True said: “I hope that residents agree that the new Gloriana boat house in Orleans Park, with its inventive architectural design, together with a brand new play area and state of the art café – will benefit not only those visiting the vessel, but also the hundreds of existing park users and be a further conspicuous step in the revival of Twickenham under this Council. She is surely a vessel of which the whole country can be proud."

Be sure to participate in the public consultation - and why not share your views below...