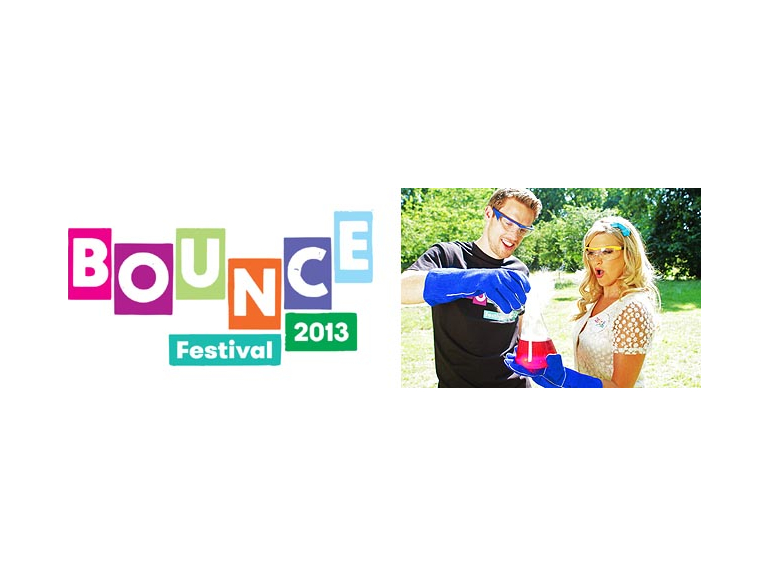 Taking place on 10 and 11 August in Old Deer Park, Richmond, the imaginative new festival has a full schedule of entertainment shows on the Bounce Main Stage which will hosted by Anna all weekend, plus five additional activity zones including everything from science experiments to street dance. Every activity is included in the ticket price which is just £60 for a family of four.

Famed for his extreme science shows, full of exciting experiments and explosions, Greg Foot will present two interactive science shows throughout both days, Kaboom and Everest Lab, in his very own Daredevil Science zone. So far in the name of science Greg has been buried alive, frozen, shot and electrocuted, so expect the unexpected!

Exciting musical shows feature throughout the weekend. The boys from Da Bluez, a street dance troup from Olivier Awarded Blue Boy Entertainment, will be performing their own brand of show stopping routines. And created by international beatboxing superstar Shlomo, The Vocal Orchestra brings an hour of incredible spine-tingling musical entertainment; a celebration of everyone’s favourite tunes using seven mouths, seven mics and no instruments.

On the Main Stage extreme juggling duo Rosie and Chaz will bring uproar from the crowds with their juggling, danger, jokes and ear bending skill, plus the specially created Bounce Circus Spectacular, blending the best of contemporary and traditional circus for Bounce Festival, with entertainment from some favourite faces and the freshest new talent on the circus scene from every corner of the UK!

Creative kids can take part in the Big Bounce Masterpiece, trying their hand at different artistic styles from Kandinsky to Keith Haring, in which all the artwork created will be combined to make one huge show-stopping piece of collaborative art in the Create and Craft area.

In the What’s Cooking zone, food broadcaster Beverley Glock has created an exclusive Splat Cooking show where kids will discover exactly where food comes from and why we love and hate certain foods.

In No Limits the army assault course will challenge even the most energetic of kids, who can also try out all kinds of weird and wonderful cycles in the Bike It race and undertake the England Rugby Skills Experience. While Dig It has the Creepy Creatures zoo and the Baa-rmy Sheep Show.

Elsewhere the Comedy Club4Kids will have the whole family in stitches, and we have a very special guest appearance from the insanely ridiculous Dr Palfi - join Palfi and Minnie for the mind bendingly dynamic Not the Flying Tortoise Show.

Once the kids are joining in the activities, parents haven’t been forgotten, there are special areas on hand to sit back, relax and socialise while the kids enjoy the fun.

Bounce Festival is brought to you by experienced family event organisers Sledge, the people behind a number of successful family events including BBC Blue Peter’s Big Olympic Tour, Nickelodeon Jr Jump Up and the Innocent Village Fete.