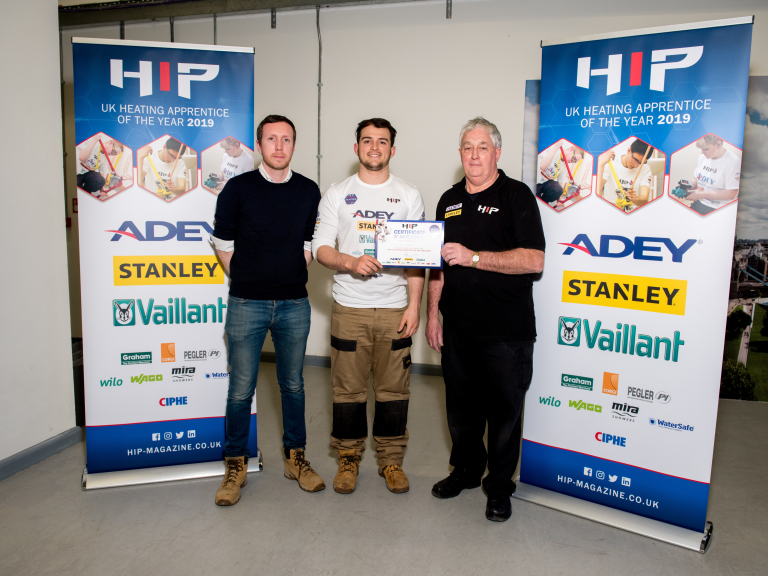 During January and February, HIP magazine travelled across seven regions of the UK. The winner of each regional heat and the highest runner-up overall scorer went on to the grand finale. Jake was nominated for the competition by lecturer, Daniel Richards, and came second at the regional heat, which took place at West Herts College. He was given a technical drawing to complete in a set time, during which he installed copper pipework to a boiler and a shower.

In addition to this great success, CIPHE visited RuTC on Tuesday 26 February, presenting the college with its Approved Training Centre Plaque. CIPHE was established in 1906 and is the professional body for UK’s plumbing and heating industry.

CIPHE’s National President, Tracey Richardson, and Technical Manager, Jerry Whiteley, talked to RuTC’s Plumbing students of various levels. They stressed the importance of learning as much as possible in college to be prepared when going into the workplace, how the future of plumbing will change due to renewable energy and were pleased to hear how much pride RuTC’s students take in the work they do and skills they learn.

Daniel Richards, RuTC Construction lecturer, said: “It takes pride and passion in what you do and hard work to achieve perfect results. Jake demonstrated this at the competition, showing how much his plumbing skills progressed both in college and his workplace over the last six months. Being now also presented with the Approved Training Centre Plaque by the CIPHE is a great honour and the collaboration with the institute will benefit our students in the future. The award and plaque are a statement for the quality of plumbing courses taught at RuTC.”