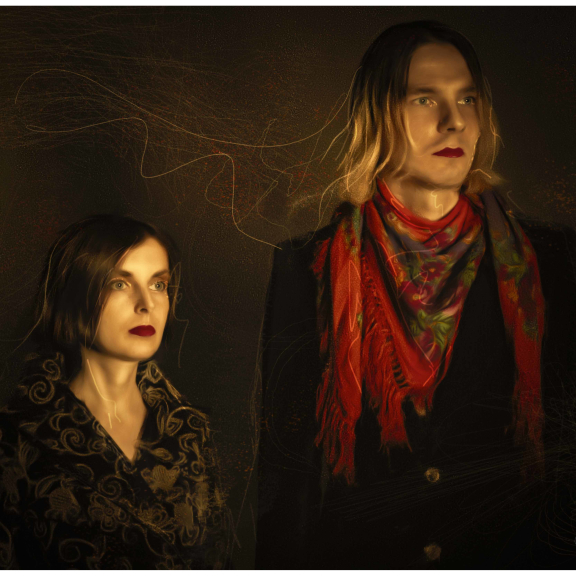 "Watch out for tAngerinecAt... this is some of the most powerful music I have heard in a long time!" - LOUDER THAN WAR "I've never seen someone play a hurdy-gurdy so punk..." - DEVIL’S DYKE NETWORK

"Watch out for tAngerinecAt... this is some of the most powerful music I have heard in a long time!" - LOUDER THAN WAR

“tAngerinecAt brought not just synth to the table, but a whole range of physical, classical instruments into the mix - most noticeably their use of the hurdy-gurdy, to make their music the deep notes of severe doom and dread that gave it the feeling of a rave in a mausoleum...”- Ben Knight, LEFTLION

Nothing is quite like a HURDY-GURDY. The tone of the ancient instrument is a bit like that of a viola, a bit like an accordion, and more than a little like an analogue synthesizer on an otherworldly setting. But while the hurdy-gurdy is associated with folk dances and medieval courts, in the hands of a daring master, it can make music that's strikingly modern. Eugene Purpurovsky of tAngerinecAt is an inventive player of exactly this kind, and her hurdy-gurdy is the hand-cranked engine that powers the duo's remarkable sound.

TANGERINECAT matches the Ukrainian-born Purpurovsky's hurdy-gurdy, voice, provocative lyrics, and production with the sound transformations, synths, bagpipes, ethereal whistles and recorders of musician and sound designer Paul Chilton. Originally formed in Ukraine, where Chilton studied music and the duo has its historical and musical roots, tAngerinecAt are now based in the UK. Both artists contribute samples, ambient noises, and processed beats that evoke DIY techno, raw punk rock, and spectral folk traditions in equal measure. The resulting hybrid is music out of time: songs that could only have been made during the troubled days of the twenty-first century, but replete with echoes of ancient triumphs and tragedies.

The pair's fourth album ‘Many Kettles’ casts a particularly dark spell. This is electronic music with a furious human pulse, a bold dance in the face of cruel authority that evokes "the feeling of a rave in a mausoleum" as Ben Knight of LeftLion put it. It's also an outlet for Purpurovsky's fiery statements of intent. The singer and hurdy-gurdy player has plenty to say about the parlous state of the world; "I Don't Want To Be A White Master", the kick-off track on the album, is a furious rejection of the rising global culture of fascism and cruelty. Through tAngerinecAt, Purpurovsky strikes back at oppression of all kinds - class, cultural, economic, ethnic, gender, and interpersonal - and invites the listener to join the resistance. With four independently released, successfully selling albums that have had airplay on BBC 2, BBC 3 and BBC 6, the duo is claiming its ground by touring their breath-taking live shows internationally in the Ukraine, UK and Russia.

THE OTHER PIPER - SPECIAL CONCERT ADDITION:
As special addition to Tangerinecat’s show at The Hermon Paul Chilton as The Other Piper will open the evening by performing an introductory set of tunes on the Duda, a type of bagpipe from the Hutsul region of the Ukrainian Carpathian Mountains. Paul learned to play this unusual instrument from the last remaining Duda maker in this part of the world and will share related anecdotes with the audience. No-one to take the back-seat for long, Eugene will join Paul in this set for the rendition of a ritual song from the same region performed in the traditional style.