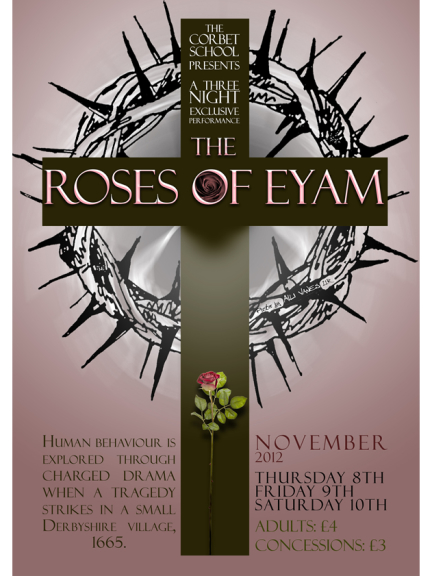 The Roses of Eyam – by Don Taylor

The Corbet School play this year  tested the dramatic skills of all involved.

The play tells the now famous tale of the little lead mining village in Derbyshire which, on discovering it had the plague (brought in with a trunk of clothing from London) took the courageous step of sealing itself off to the world while the Black Death took its course, eventually killing up to a third of the villagers.  Not only this,  the outbreak occurred but  14 years after the end of the English Civil War and the villagers were still sitting in uneasy truce over their beliefs.

The play was in the round, with the audience encouraged to sit about the ‘market square’ to watch the event unfold.  This added an air of inclusion, which heightened the audience’s emotions as the awful contagion claimed the lives of the villagers.

The roles of Mompesson, the Cambridge educated Rector, and Stanley, the embittered Puritan preacher were played by Alistair Vane and Christopher  Hendry.  Both boys grew into their roles as the evening commenced, and I was filled with admiration for how they had grasped, and transmitted, their individual crises of faith and burning through the crises to a deeper understanding of themselves and their relationship to God.

Madame Mompesson was eloquently played by Rachael Holbrook, as she traversed the arc of happy Rector’s wife and mother, through courageous nurse of the afflicted to the steely eyed woman who, having made sure her children were away and safe, stayed by her husband’s side until her death.

Lewis Hall was very convincing as The Bedlam, a mad boy, who together with Chris Finch as gangly grave digger and Rachael Bright and Ryan Heath as the  curmudgeonly ancients provided the  chorus and continuo for the play.

All the cast must be congratulated on successfully unfolding to their audience the human intrigues, the bewilderment  they felt on why God had chosen to punish them and the miserable horror of losing one’s family or lover and facing death oneself.

Plaudits also to the director, Ian Evans, Acting Coach Margaret Jones and the background crew for the staging of this intricate play.