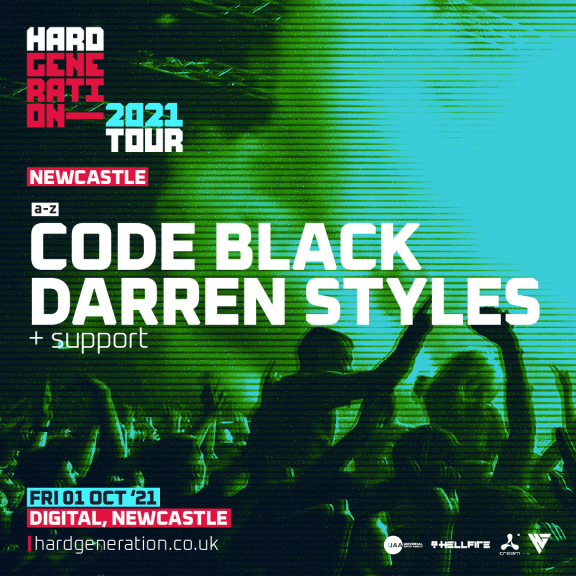 Following on from the announcement that the HARD GENERATION 2021 TOUR, headed up by DARREN STYLES, will be rolling into Digital Newcastle, we are pleased to announce that CODE BLACK, and more will also take to the decks on Friday 1st October 2021.

Renowned for being one of the most devoted and ambitious figures when it comes to production, CODE BLACK has enjoyed countless success with his releases such as the critically acclaimed masterpiece 'Red Planet' and collaborations with the likes of Darren Styles, Da Tweekaz, Wasted Penguins and ToneShifterz to name a few. The iconic HardStyle producer is also highly successful DJ with a dedicated legion of fans following him across the globe to see him perform on colossal stages such as Defquon.1, Q-Base, Tomrrowland and WISH Outdoor where he had the honour to produce the anthem "Time Of Your Life' alongside artist Slim Shore.

CODE BLACK and more join us in Newcastle for the HARD GENERATION 2021 tour, an all-new concept that will be bringing you a series of very special guest DJ's from the world of Hard Dance, joining none other than one of the scenes biggest trailblazers DJ/Producer Darren Styles.