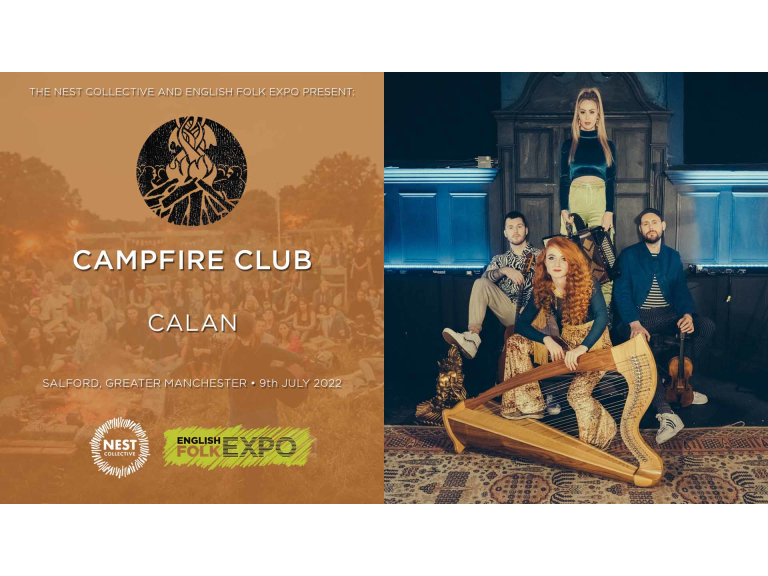 The Nest Collective & English Folk Expo invite you to enjoy a beautiful fireside concert with Calan.

Rediscover one of life’s simplest joys – the sharing of live music in the glow of a campfire.

Every summer, we gather in beautiful green spaces within cities to hear extraordinary music by artists from all over the world.

In the simple way that people have done for thousands of years, we come together around the fire to enjoy music, food, drink and the company of others.

For this Campfire Club we are delighted to present Calan.

CALAN are a multi award-winning Welsh folk band comprising of five virtuoso musicians formed after they met at a folk music course in Sweden. They won international acclaim at the world-renowned Inter-Celtic Festival in Lorient, France, where they would eventually become the first Welsh ensemble to win the coveted International Band Trophy. In April 2019, they were voted Best Band at the inaugural Wales Folk Awards.

The support act for this show is Ceitidh Mac. Ceitidh blends the warming tones of the cello and mellow vocals to create a transformative sound that puts a progressive twist on the alt-folk genre.

“Getting to hear live music after so long was deeply emotional and the feeling of collective spirit (especially now) was really powerful.”

“This was my first live music event since the beginning of the year and, although the acts were brilliant, I think what will stay with me is the joy of being with people and enjoying the moment together. I feel very grateful to you all for putting on the event.”

“Walking into a wonderland of nature with beautiful music and people, it made me feel wonderfully elated.”