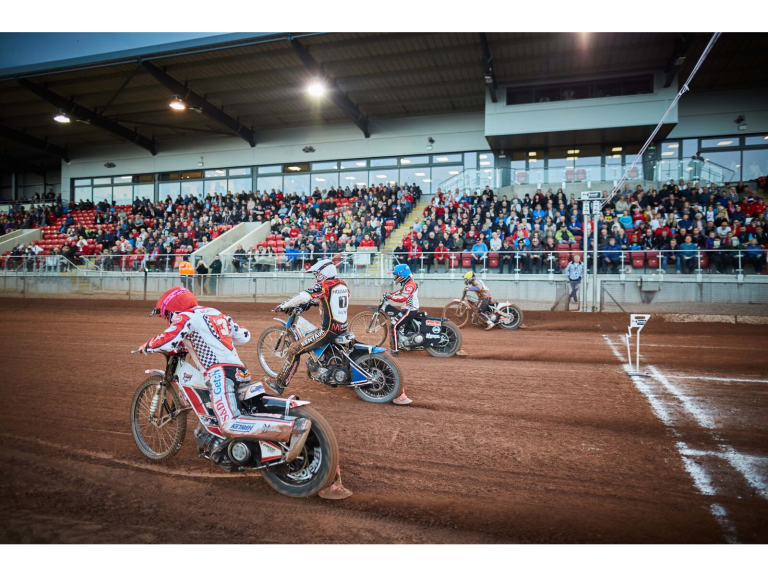 Speedway is set to return to the National Speedway Stadium on Kirkmanshulme Lane in time for the newly named 2017 British Speedway Premiership as a new consortia has been agreed to secure the future of the historic Aces club.

Founded by Tony Rice and Robin Southwell, Belle Vue Speedway 2017 Ltd can now be announced as the new owners of the Belle Vue Aces franchise. The British Speedway Promoters Association (BSPA), who have control over speedway promoters’ licences across the UK, have confirmed their decision following consultation with Manchester City Council.

The franchise took control on 24 February 2017 and will occupy the National Speedway Stadium at the Belle Vue Sports Village. Bringing significant commercial experience to the venture, Club owners Tony Rice and Robin Southwell have strong business links to Manchester and have the desire to develop a long-term and sustainable future for the Club in Manchester and to promote the National Speedway Stadium as a world class venue for Speedway activity in the country.

The Club Owners have appointed Adrian Smith as Chief Executive Officer (who has worked with Tony Rice in other businesses) and are also delighted to announce thatMark Lemon the 2015 & 2016 Team Manager and well known speedway figure has been appointed as Director of Speedway reporting to the CEO.  In their roles, Adrian will have overall responsibility for developing and managing the business and Mark will be Team Manager and will also have full responsibility for all the Premiership, National and development team activities.

Club Owners Tony and Robin commented: “Whilst it has taken a few weeks to finalise negotiations, we are delighted to become the new owners of the Belle Vue Aces. We have been impressed with Manchester City Councils passion and commitment to Belle Vue and believe that we will continue to build a close working relationship with them as we develop the business during the season.”

Adrian Smith said: “I am delighted to be joining Belle Vue Speedway 2017 and I am very excited that Mark Lemon is our Director of Speedway.  Both of us are determined to build a sustainable club that our fans and Manchester can be truly proud of.”

Sir Richard Leese, Leader of Manchester City Council, said: “Belle Vue Aces is one of the Manchester’s most historic sporting clubs and to be able to confirm their continued tenure at the National Speedway Stadium will be welcome news to their fans.

“We would like to thank the British Speedway Promoters’ Association (BSPA) for working constructively with us over the past few months, during difficult circumstances, and we welcome the new owners on what we hope will be a successful future for the team, on a track that has already been recognised as one of the best in the world.”

Keith Chapman, Chairman of the British Speedway Promoters Association (BSPA), said: “It’s a thrill to be able to officially announce Belle Vue Speedway 2017 Ltd as the new owners of the Belle Vue Aces franchise, securing the club’s future after a period of intense speculation. The National Speedway Stadium is a shining beacon of British Speedway and today’s news marks the start of a bright future for the club.”