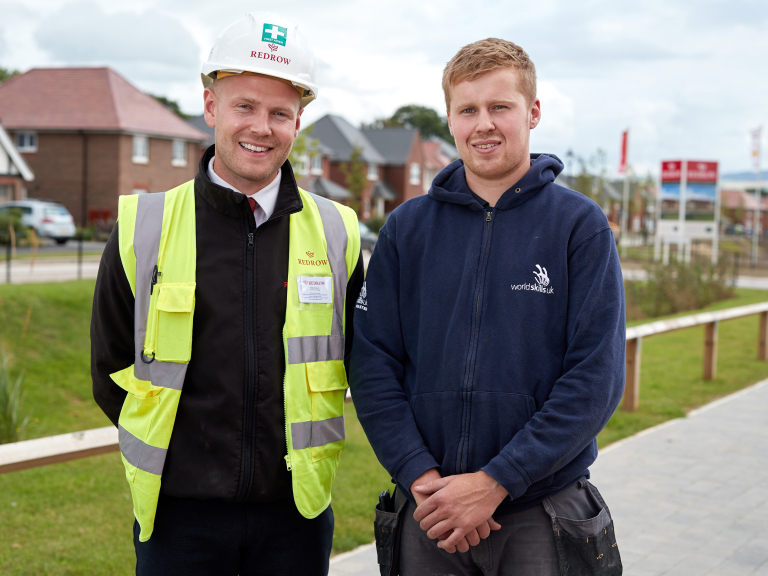 There is much more to Ashley Terron than meets the eye. Not only is he excelling in his construction career at the age of 27, but he is also mentoring the next generation of bricklayers.

After winning gold at the global Worldskills competition in 2013, Ashley is now an assistant training manager for Worldskills UK and has spent the last 18 months passing on his wisdom to 21-year-old Lewis Greenwood.

Both Ashley and Lewis are preparing to travel to Kazan, Russia, at the end of August, where Lewis will be representing the UK in the bricklaying category and Ashley will be part of the UK media team. Ashley also represented WorldSkills UK on the BBC’s One Show last night (14th August).

Ashley - now an area construction manager for Redrow Homes having joined the housebuilder as an assistant site manager in 2014 - first became involved in Worldskills when he was working a trainee bricklayer.

Following in the footsteps of his father and brother, who also work in the trade, Ashley was chosen as ‘Best in Class’ at Warrington & Vale Royal College, and was put forward for the regional competition. After winning that, he was entered into the national Worldskills UK Live competition and from here was then successful in going on to the global competition.

Ashley, from Warrington, and currently based at Woodford Garden Village, near Stockport, for Redrow, says: “There is so much preparation that goes into the Worldskills competition - I was training for two years before the global competition in Germany. Myself and two other people who were entered into the bricklaying category trained together all over the UK in all different environments ranging from working indifferent colleges/institutions around the UK to taking part in international ‘pressure tests’, where I went to the Danish National Final to compete.

“I also took part in the ‘Global Skills Challenges’ in Perth, Australia, where I competed against six other nations prior to the main world final and managed to win that competition too, which stood me in good stead for the main event. When we got to Germany for the global competition, I was competing against 26 nations and after the four day event, to find out I’d won gold was my biggest achievement.”

After winning his accolade, Ashley wanted to stay involved with the inspiring platform and so became an assistant training manager with Worldskills UK and as part of this set up has been a mentor for Lewis. The duo have been spending time together so Ashley can share hints and tips to enable Lewis to be at the top of his game. They have spent time together at Redrow’s Woodford Garden Village doing practice runs of the two world final events. Lewis is building projects that have been designed by his training manager or they have been used previously in a WorldSkills competition.

Over 200,000 people will attend the Worldskills event in Russia from August 22 to 27, so Lewis, from York, who is currently employed by PDS Construction, will be showing off his bricklaying technique to a huge audience. A wide range of skills are put to the test at the event from bricklaying, carpentry and welding to cooking and floristry.

This time round Ashley is attending as a member of the Worldskills UK media team and will be reporting from the event and has recently undergone media training to prepare.

“It was great, we were taken to a mock studio and taught how to present ourselves while were on screen. Each day at 4pm I will be live streaming highlights of the day on social media channels and we also have a Sky channel that we will broadcasting on too.”

Worldskills has opened many doors for Ashley, who was also named in the Queen’s Birthday Honours List of 2014 and awarded the British Empire Medal for 'services to skills’, and he hopes that he can pass his knowledge and skill onto the next generation.

“I don’t think I’d have achieved as much as I have if I hadn’t competed in Worldskills. Not only have I travelled around the globe to places such as Sao Paulo and Abu Dhabi, and been named on the Queen’s Honours List, but it’s meant that I’ve had a broad support and training system around me that I have then been able to apply in my career.”

Ashley has also made his mark at Redrow and was recently promoted to area construction manager after a career that has seen him progress swiftly through the ranks of site manager and, more recently, a senior project management role. Last year he won an NHBC Pride in the Job Quality Award for his work at Woodford and was commended in the national NHBC Health & Safety Awards.

Paul Moore, managing director for Redrow Homes (NW), said: “We’re extremely proud of Ashley and his achievements. As a business we are very committed to the training and personal development of all our staff and Ashley is the perfect embodiment of that, both in his own career progression and the way he mentors others that work with him and around him.”