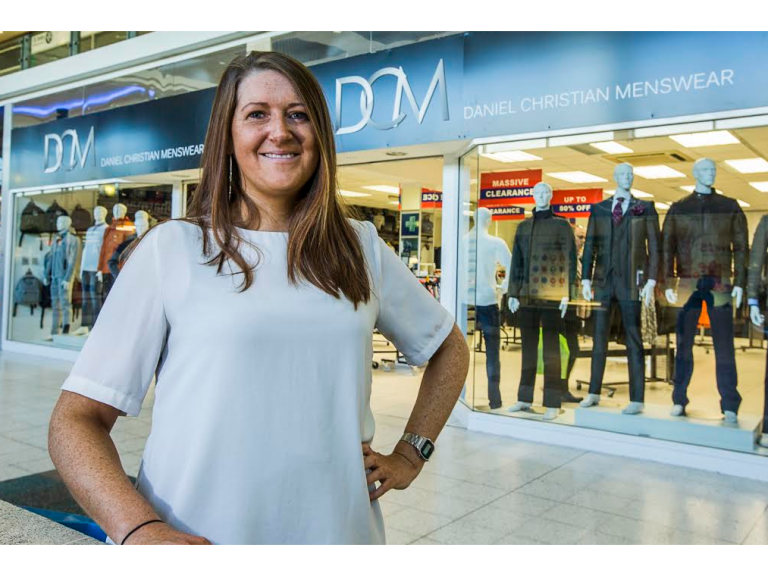 An independent menswear chain has trebled the size of its store at Stretford Mall in a £25,000 expansion and rebrand, which has created three new jobs.

The Source has moved from its original base in the shopping centre to premises three times larger, reopening under the brand Daniel Christian Menswear (DCM), in keeping with other stores owned by the Manchester firm.

The £25,000 relocation, which has involved the recruitment of two new full-time staff and one part-time worker, is part of an ambitious expansion project which will see menswear chain DCM double in size from five stores to 10 over the next two years.

“The retail industry is tough especially when business rates are crippling the smaller independent retailers like ourselves which is partly why many are falling by the wayside,” said DCM board member Tricia Keogh.

“We strive to set ourselves apart by focusing on great customer service and ensuring customers receive a positive and professional experience in store combined with great branded products at great price points.

“As a local independent we can offer brands which would only be available in Manchester City Centre or the Trafford Centre.

“We feel that it’s important for us to retain a DCM presence in Stretford – we see future potential growth in Stretford and all parties are working together to improve the general area.”

Stretford Mall centre manager Gareth Wilkins said: “It’s marvellous to see DCM going from strength to strength. We’re so happy to support them as a local independent who are really giving some of the larger national chains some great competition.”

Traditionally a supplier to the textile trade, Daniel Christian Menswear opened its first retail store in 2009 in the Lowry Mall, Salford Quays.

It was followed 12 months later by a store in Middleton in North Manchester before The Source opened in Stretford Mall in 2011.

A further store opened in Rochdale Exchange shopping centre in 2014 and in early 2015, the retailer launched a fifth footwear store called SCARPA in the Lowry Mall in Salford.

Additional locations are currently under review with a further five store openings are planned for the next two years.

The business currently employs 16 members of staff across its North West stores, including Rose O’Grady who is store manager at the new Stretford Mall premises.

Originally from Stretford but now living in Salford Quays, Rose has been part of the DCM team for eight years and is well-known to customers who always speak highly of her service.

“I’m very proud and happy to manage the new store,” she said.

“Since opening we’ve received congratulations from lots of customers and have received numerous positive comments on how well the store is laid out and presented.”

Tricia, who lives in Middleton, has an extensive background in the manufacture and wholesale of menswear and made the jump to retail six years ago for the opportunity to market the group’s own products.

The new unit in Stretford Mall was relaunched under the Daniel Christian Menswear branding to create uniformity across the retail portfolio and to become more recognisable to customers as the business opens more units in other towns.

“The standard of shop fit now is a true reflection of the quality of merchandise and brands we stock,” said Tricia, 53.

“Moving to a larger unit is a huge investment.

“The shop fit has cost in the region of £25,000. We’ve also raised the profile of our brand mix to offer a greater selection of both formal and casual attire.

“I’m immensely proud of our business and any success we have is down to the hard work and efforts of all the team at DCM.

“As a company we want to become the leading independent menswear retailer in the North West providing great products at competitive prices and offering the highest level of customer service.”